Native title: Fighting each other for power, money

There are further signs of the disintegration of Lhere Artepe Aboriginal Corporation (LAAC), the organisation set up by the Federal Court to represent native title holders in Alice Springs.

A general meeting was scheduled for Saturday but the doors to the venue, the conference room of the Chifley Hotel, remained locked.

The meeting agenda included discussion about further financial investment by LAAC in three supermarkets, the IGAs at Northside (above), Eastside and Flynn Drive.

The Northside and Eastside buildings are owned by LAE Holdings in which the three estate groups of LAAC are shareholders.

The balance of the sale money was directed to LAE Holdings to reduce the balance of that loan which covers the buildings occupied by the supermarkets.

The controversial Mt Johns project, although not yielding as much as LAAC had hoped, resulted in paying off the Nominees’ debt and reducing the Holdings loan, says Ms McMartin.

The Board of Lhere Artepe Enterprises is now seeking support from LAAC to consider  investing in the supermarkets “for the future benefit of the native title holders”.

LAAC has in the past contributed some money to fix a roof at Northside and the Board of LAE is now seeking ongoing support from LAAC to undertake other such projects “that will contribute to the successful development and appeal of these three IGA stores”. 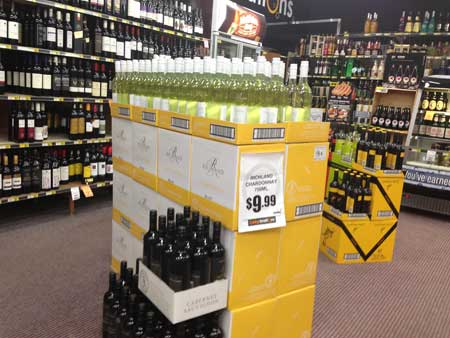 She says: “It’s a hard market in a town the size of Alice with a  population of about 28,000 that has two of the major supermarket chains and a number of independent grocery  outlets.”

Ms McMartin says she understands that  there have been suggestions by a few LAAC  members about closing the liquor outlets (archive photo at right) attached to the supermarkets “but this is not a viable business option”.

She also said she understood that not all shareholders agreed with those suggestions.

“Some people have talked about that, mostly people who are feeling harassed when going to the stores, having their IDs checked by police and their cars inspected. It makes them feel uncomfortable, although we understand police have a job to do,” says Ms MacMartin.

Closing the liquor outlets “would not be a good business decision” and may put the viability of the stores in jeopardy.

Russell Bray says he was one of a small number of people turning up for Saturday’s meeting. He said he is “sick of things” as the “three estate groups are fighting each other for power and money”.

Another member, William Craig, who had arranged to attend the meeting via phone link from Darwin, says the organisation is run by people who do not have the appropriate authority.

It is unclear whether Rosalie Kunoth-Monks is still the chairperson – she would not comment on reports last week that she had resigned.

There are some further urgent issues over which the native title holders need to be consulted, but it appears that there is no representative body with the mandate to speak for them.

The issues include the proposed extension of the town council landfill westward into an area covered by native title; flood mitigation including a possible dam upstream of the Telegraph Station, and a NT Government proposal to project images telling traditional stories onto the northern flank of the MacDonnell Range adjacent to the Desert Park.