Finke Day One: Two Alice riders in the first four

Local rider Daymon Stokie went off on the Tatts Finke bike race together with Dakar ace Toby Price in pole position at 11.30am.

Price was first into Finke in 1:53:19, but Stokie came fourth with a time of 1:57:25, having been passed by Tye Simmonds and Alice rider David Walsh.

That’s two Alice riders in the first four out of a field of about 380.

Price had earlier this morning raced a buggy to Finke, working his way up from 19th starting position to fifth place. He came back to Alice in a light plane for the bike start.

Honda rider Stokie, whose best result in the Finke has been coming fifth, said before the start he was aiming to get a “clean, smooth start, and do my own thing. Threat it like a pre-run and get to the other end as quick as I can.

“The track is going to be really rough, it’s been rough all year in the lead-up but there is a little bit of moisture on the ground and hopefully that will do us a few favours. There is also a headwind today and that might get rid of a bit of dust if there is any.”

Price said after his run in the buggy, being at the head of the field, the track was “still fairly fresh but there were still another 90 cars or so behind me, it’s definitely going to be torn up.

“But I got a little bit of track knowledge, so that’s good.”

Meanwhile race organisers say a team member of Car 94 was taken to hospital yesterday “in a serious but stable condition” after an accident in the prologue. They name the crew as Tanner James and Adrian Lucey, but do not name which one was injured, and said “no further details will be released”. 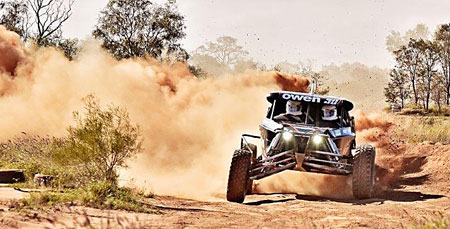 The return legs tomorrow are likely to see the car and buggies winner into Alice at 9am and the bikes at 1:45pm.

PHOTOS (from top): Riders at this morning’s briefing • Toby Price • Daymon Stokie with his bike • The winning buggy •