Apprentices may be included in controversial scheme 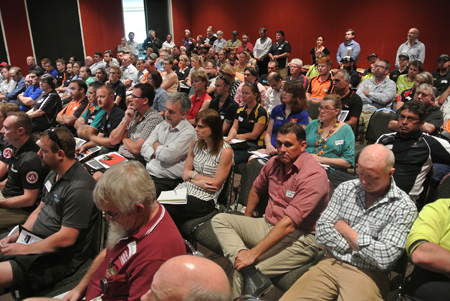 The possible inclusion of apprentices of any race in a scheme initially designed to increase Aboriginal employment in the building industry was announced at a government business seminar in Alice Springs this morning.

Builder and Town Councillor Jamie de Brenni, who had been heading up a group of construction industry managers critical of the scheme, said he was “really encouraged” by this morning’s meeting, especially by the inclusion of apprentices, now under consideration.

“The meeting provided the clarifications I had been looking for.”

David McHugh, the head of the infrastructure department, agreed to look at the controversial program, known as the Provisional Sum scheme, that pays an extra 10% on contracts which provide a one-third quota of Aboriginal employment.

Mr McHugh replied to Asbuild’s Paul Graham who said: “The Provisional Sum should not be disclosed at all. Just say there is funding available for Indigenous people who are associated with a project. Then you’ll see it filter right through the supply chain, through subcontractors and suppliers.”

“I am happy to take on board recommendations and we’ll analyse them and make sure we’re not going to shoot ourselves in the foot,” said McHugh.

Mr Graham said the amount of interest shown by “people who identify as Aboriginal has increased phenomenally, but unfortunately we can only take on so many people with the work we have available”.

Scott McConnell, formerly the head of the Aboriginal-owned company Ingkerreke Commercial, now the Labor candidate for Stuart, picked up on an earlier remark about the government’s Red Tape Abolition Squad and said it should be unleashed on the Provisional Sum scheme: “This is an incredible amount of red tape, a massive overhead.

“And the worst part of it is, it’s creating an artificial division in the community.”

He said businesses who like employing Aboriginal people “because they are local and likely to stay here” are put off by the way the program is set up: “It will not deliver substantial Indigenous employment at all.”

Replied Mr McHugh: “You get provisional sums in all kinds of contracts. This is no different. If you are claiming on any contract you have to justify it. Simple as that. I disagree with you.”

Mr Graham said: “Don’t use your contractors as your bank – I understand builders are doing that. They are going to create hardship for themselves.”

This topic triggered a debate about the role of subcontractors.

Speakers said some “head” contractors, to whom the tenders are awarded and who stand to claim the Provisional Sum, may feel additional costs are imposed by the scheme.

They are likely to make up for this by looking interstate for cheaper contractors and suppliers, and that would hurt the local economy.

However, it was not made clear why these head contractors would not look for cheaper options in any case – with or without the scheme.

For the more than 100 people attending the meeting, starting at 11am, some in their work boots and high-vis vests, packing a function room in the Convention Centre, the main game was clearly the NT Government’s Indigenous initiatives under fire from even staunch CLP supporters.

But they had to sit through more than an hour and a half of presentations by four public servants who seemed to have the motto: “We’re from the Government. We are here to help you.”