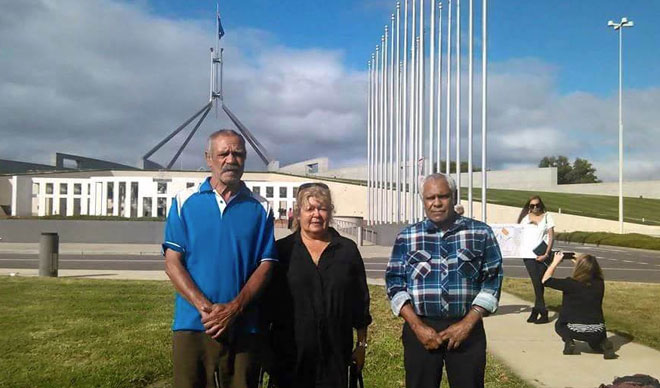 Above:  Traditional owners of the area proposed for a nuclear waste facility south of Alice Springs took part in a protest gathering this morning, organised by the Greens in the Senate courtyard of Parliament House in Canberra. Pictured are Reggie Kenny, Loyola Jones and Peter Kenny. A spokesperson for them, Tara Liddy, says there is unanimous opposition to the site from traditional owners in that region.  She says they consider the consultation process to have been flawed and insubstantial. The group was due to meet with Senator Nova Peris but she cancelled, says Ms Liddy.

The Town Council will reiterate an 11-year-old motion opposing a radioactive waste facility being built anywhere in the Northern Territory as its submission on the current short-listing of the Aridgold Date Farm site, 75 kms south of the town, for a national facility to take Australian-generated low and intermediate level waste.

Further, the council will forward as part of that submission to the Commonwealth a vehemently worded letter by then Mayor Fran Kilgarriff, whose central point was to express the town’s “outrage” at the Commonwealth’s failure to consult over its then proposed imposition of a nuclear waste facility on the NT. The choice was between one of three Commonwealth-owned sites, two of them close to Alice Springs. The site at Mount Everard was just 30 kms from town. The first thing Mayor Kilgariff heard of that proposal was via a radio broadcast, according to her angry letter.

This time round the Commonwealth has said it will not impose the facility on an unwilling community, although what it will do if none of the short-listed six is willing remains unclear. 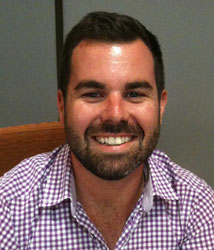 Neither is it clear that the Town Council’s 2005 motion accurately reflects the views of current members. Its chief merit seems to be that it was a way for Mayor Damien Ryan to trounce Councillor Chansey Paech’s attempt for council to voice its opposition to the current proposal. Cr Paech (pictured) had placed a notice of motion to that effect before last night’s council meeting.

In the ensuing debate Mayor Ryan, his voice heavy with sarcasm, expressed his “surprise” that Cr Paech’s supporting notes did not include reference to the 2005 motion, which remains an official expression of council policy as long as it is not rescinded. He made repeated reference to the failings of Cr Paech’s “research”.

Despite the Territory-wide reach of council’s opposition in 2005, which by default he was promoting, Mayor Ryan also noted that the MacDonnell Regional Council had not passed a motion of opposition and did not know why the Alice Town Council would be “leading the charge” on the issue.

Cr Jade Kudrenko pointed out that the 2005 motion did not address the current proposal specifically. She also said that the Commonwealth’s consultation group, at its recent meeting with elected members, had requested council’s formal advice of its position. She said it was clear from the discussions at that meeting that “none of us” supported the proposal at this stage.

Mayor Ryan insisted that the previous motion would have to be rescinded.

CEO Rex Money clarified: it would only have to be rescinded if it were in conflict with the present motion. Further, to rescind a motion requires notice being given. (Submissions on the current proposal are due by March 11.)

Crs Kudrenko and Paech argued that there was no conflict. And in any case, said Cr Paech, “that was 11 years ago”. He noted Mayor Ryan’s apparent “angst” and wanted to hear what other councillors thought.

The can of worms opened:-

Cr Brendan Heenan is convinced of the safety of the proposed facility; opposition to it arises from “more of a fear campaign”; he would not support Cr Paech’s motion and was not sure if he would support the 2005 motion either.

Cr Jamie de Brenni thinks that council should wait to see the results of the phone survey on the issue currently being conducted in the community.

Cr Steve Brown’s thinking was “much like” theirs; he was not “entirely opposed” to the facility; “a lot of people” see its possibilities as “a local industry”; he wouldn’t like to see it imposed (the Commonwealth has said that it will not be) but he doesn’t like the NIMBY attitude as Australia has a responsibility to host a facility somewhere; he agrees it’s safe, much safer than many industries “we don’t think about”. The upshot was that he would support rescinding the 2005 motion but would not support Cr Paech’s motion (which would leave council entirely without a stated position on the matter).

Cr Jacinta Price said she had a similar view to Cr de Brenni’s. Council didn’t need to reinvent the wheel on the issue; a previous council had expressed its opposition; she was concerned for nearby residents but the facility has to be put somewhere (which last point seems to be in contradiction with council’s 2005 blanket opposition).

In contrast Cr Eli Melky thought council did need to readdress the issues: council is different (no current elected members were councillors in 2005), the proposal is different.

Cr Paech proposed some modifications to his motion: changing the terminology from “nuclear waste dump” to “radioactive waste management facility”; and reaffirming the 2005 position as its current position.

As he spoke Mayor Ryan continued to interject from the chair. Cr Paech referred to the hurt and harm the facility would do to Aboriginal people in the Oak Valley area – his family.

“You seem to be disrespecting the minds that sat here in 2005,” retorted Mayor Ryan.

He called the vote. The motion was lost.

Cr Paech called for a division. Only he, Cr Kudrenko and Cr Melky got to their feet in favour of his motion.

“You seem to be quite hostile,” Cr Paech commented to Mayor Ryan, who gleefully replied: “We will stand by the wise minds of 2005.”

Just in case you have lost track of the upshot of that ‘wisdom’: the 2005 motion accompanied by then Mayor Kilgariff’s letter will now be forwarded to the Commonwealth as representing the current position of the Town Council.