Partner, sniff, know, collect, process and exploit it all – that is the motto of the new global “collection posture” for communications interception – military as well as civilian – of the group called Five Eyes, headed by the USA.

And Pine Gap, just outside Alice Springs, is a key installation in this world-wide spy network.

The function of “the base” has grown significantly in the recent past, especially with the addition of a multi beam antenna, known as Torus.

Public awareness of the Torus program is largely a product of revelations by former National Security Agency (NSA) contractor Edward Snowden. So says a report released last week by a team from the Nautilus Institute for Security and Sustainability, in Berkeley, California, including Desmond Ball, Emeritus Professor at the Australian National University.

Prof Ball has published widely about the American spy base here. 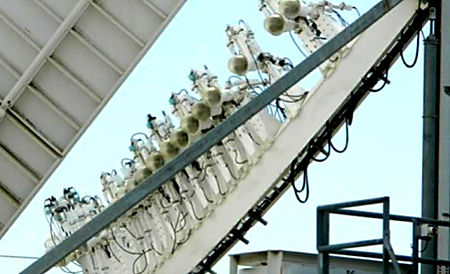 The other authors are Duncan Campbell, an investigative journalist; Canadian blogger Bill Robinson; and Richard Tanter, Honorary Professor in the School of Political and Social Sciences at the University of Melbourne.

The report’s authors say they conclude that development work at the observed … sites since 2000 has more than doubled coverage, and that adding “multiple” Torus installations around the world has more than trebled potential coverage of global commercial satellites.

Says Prof Ball in a comment to the Alice Springs News Online: “A fundamental transformation in roles and strategic implications has occurred.

“It was a highly specialised mission, control of geostationary Signals Intelligence satellites focussed on selective microwave emitters on the ground or telemetry emitted during missile tests, intelligence collection, and essential for arms control verification.

“Now it is a multi-agency, multi-purpose mega-intelligence centre. Collect-it-all. Military as well as civilian. Linked directly to military operations, including drone strikes.

‘There have been no official statements about new roles. There is a need for a informed public re-assessment.

“Maybe some roles are now difficult to justify, e.g., drones, certainly for me. Collect-it-all and privacy. But how to separate out the necessary from the excessive?

“Each of the various roles needs to be re-evaluated, publicly justified. Collect-it-all because Torus now permits, not because it provides lucrative intelligence,” says Prof Ball.

The report says: “Although these developments have taken place in open sight, the deployment of the Torus antennas has mostly gone unheralded.

“There are about 232 antennas available at identified current Five Eyes sites, about 100 more antennas than in 2000.

“We conclude that development work at the observed Five Eyes sites since 2000 has more than doubled coverage, and that adding Torus has more than trebled potential coverage of global commercial satellites.”

The report says the Pine Gap satellite ground station is managed by the US National Reconnaissance Office.

“Its original and still principal purpose is to serve as the ground control station for geosynchronous signals intelligence (SIGINT) satellites developed by the US Central Intelligence Agency (CIA).

“It probably remains the CIA’s most important technical intelligence collection station in the world.

“The first of the CIA’s geostationary SIGINT satellites, then called RHYOLITE, was launched on June 17, 1970.

“A reorganisation of the management structure in 1997 established Special Collection Elements, comprising personnel from not only the CIA but also the NSA and Service Cryptological Agencies.

“In the case of the US Navy, for example, an Information Operations Detachment was established, with three officers and 40 enlisted men, in March 1998,” says the report.

“There are now 38 satellite dishes and radomes at Pine Gap. Most are still concerned with the core function of controlling geosynchronous SIGINT satellites and processing and analysing the intercepted intelligence.

“On October 1, 1999, the US Air Force officially opened a Relay Ground Station which relays data from US missile launch detection / early warning satellites … to both US and Australian HQs and command centres. It replaced the US Air Force’s DSP ground control station at Nurrungar [about 15 km south of Woomera].

“Six of the satellite terminals at Pine Gap, four in radomes and two unshielded, belong to the Relay Ground Station.

“Another three radomes are probably associated with the US Missile Defense Agency’s Space Tracking and Surveillance System. 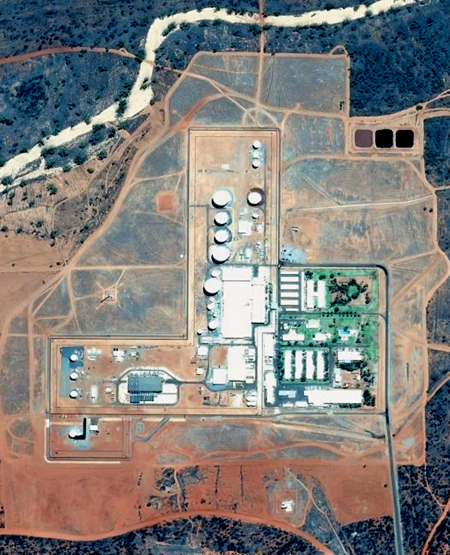 “Of significant interest, it appears that Detachment 2 of the US Air Force’s Air Intelligence Agency’s 544th Intelligence Operations Group, previously located at Sabana Seca, Puerto Rico, was transferred to Pine Gap in the early 2000s [which signified] that Pine Gap had become a new Foreign Satellite site.

“A Torus multi-beam antenna was installed at Pine Gap in 2008. It is located a little more than 200 metres south of the main compound in an entirely separate fenced compound measuring 55 meters by 50 meters.

“It was the first satellite antenna at Pine Gap to be located outside the principal antenna compound.

“The antenna faces north-northwest, boresighted at 329 degrees towards the equator, corresponding to 120 degrees East on the geostationary belt.

“Its purview extends from about 85 degrees East to about 155 degrees East longitudes, fitting the gap between Seeb [on the north coast of Oman] and Waihopai [in New Zealand].”

PHOTOS (from top): Part of Pine Gap, with multi-beam antenna at rear (banana-shaped), photo courtesy Richard Tanter • Close-up of Torus antenna • Google Earth image of Pine Gap • All photos except the Google Earth and the one of Prof Ball one are from the report.