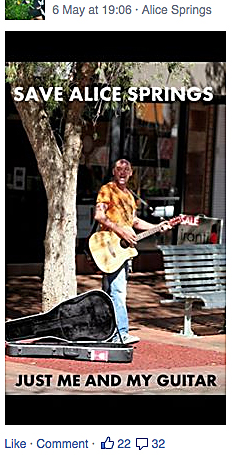 The spokesman for a supposed paramilitary group in Alice Springs, Gary Hall, seems to have been rejected by his base.

Most references to him have been deleted from a Facebook page, Alice Springs Community Open Forum, according to a long-time watcher of the local social media scene.

He provided the following comment on the condition of not being named: “There are still some threads on there but Gary and all the 600 plus comment threads were kicked off.

“To quote the site’s admin, who never deletes anything or kicks out anybody: ‘Just too much of a nut job, even for the open.'”

Others posted “GARY has left the room and the door hit him on the arse on the way out” and “Go play with ya guns ya nut job”.

Meanwhile Mr Hall says the group, Alice Springs Volunteer Force, will be patrolling the Eastside this weekend until 7am on Monday, looking out for people “stealing, fighting, breaking in, damaging cars”.

He says it will be a “military operation” but also urged people noticing criminal behaviour to call the police on 131444, asking for a Promiss Number and ensuring the call is recorded.

The report about Mr Hall in the Alice Springs News Online and on its Facebook page drew a very large readership.

PHOTO: One of the remaining references to Hall on the community FB site.