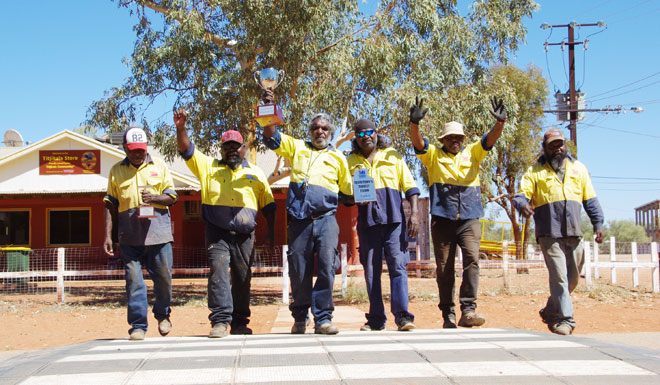 EARLIER STORY:
MacDonnell Regional Council’s President, Sid Anderson and CEO, Jeff MacLeod, along with workers from each of their region’s three finalist communities are hoping for a win at tonight’s Territory Tidy Towns awards in Darwin.

The communities include the reigning Territory Tidy Towns winner, Titjikala, its Simpson Desert neighbour, Finke, and Haasts Bluff, from within the West MacDonnell Ranges.

When MacDonnell Council formed in 2008 many communities didn’t have a regular rubbish collection and households burned their waste in old fuel drums in the street.

In recent years the Tidy Towns competition has been reinvigorated in remote communities across the Northern Territory.

Last year the entire Titjikala community embraced the responsibility to keep their community clean and proudly celebrated their win. This year there was competition for the honour throughout the council’s 13 communities, with local
Civil Works teams providing the backbone of council achievements.

Once again, Titjikala is a finalist in the ‘Best Medium Community’ category. Since its win last year, Titjikala has installed street-name signs and taken delivery of a reconditioned compactor truck to improve its regular rubbish collection service.

Finke is a finalist in the ‘Community Participation Award’ category. As well as similar upgrades to its cemetery, Finke (known locally as Aputula) has this year completed its family park with the installation of new playground equipment, shade, seating, bin-stands and bollards.

New seating was also installed at the softball pitch with trees planted around the sports ground perimeter. It has two new pedestrian crossings and has taken delivery of a new compactor truck that will improve its regular rubbish collection service.

Meanwhile, Haasts Bluff (also known as Ikuntji) was named a finalist in the ‘Most Improved Community’ category. Its Civil Works staff commenced Certificate 2 training in Rural Operations in partnership with the Centre for Appropriate Technology (CAT).

It too has had upgrades to its cemetery that include a new shade structure, seating, water tank and wheelie bins, as well as to its family park.