Home Issue 38 Zachary Rolfe: is there a case to answer?
Issue 38Volume 25 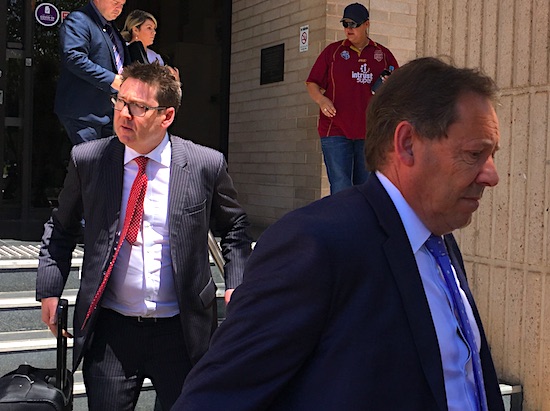 The shooting of Kumanjayi Walker was “justifiable defensive conduct” on the part of Constable Zachary Rolfe, the Alice Springs Local Court heard today in submissions by defence counsel, David Edwardson QC (top, at right). “No properly instructed jury” could exclude the defence, and so Judge John Birch should rule that there be be no case to answer.

On the contrary, responded prosecuting counsel Phillip Strickland SC, such a defence is “classically a jury question” (to be considered at trial). The defence goes to the state of mind of the accused – his belief that his actions were necessary – and the reasonableness of his response in the circumstances as he believed them to be.

Mr Walker died in the evening of Saturday, November 9 last year in the community of Yuendumu, north-west of Alice Springs. Members of the mainly Warlpiri community and their supporters gathered outside the court today, with a few also attending inside to hear final submissions in the committal proceedings.

In this case, the core facts are the three shots fired by Const Rolfe. There is no difference between them, argued Mr Edwardson for the defence, as they occurred within three seconds of one another.

The law recognises the reality of police officers having to act in “the agony of the moment”. His client knew Mr Walker was predisposed to violence and ready to arm himself and deploy a weapon in order to resist arrest. He had stabbed Mr Rolfe before the first shot and was continuing to resist, armed with a pair of scissors, even after the second and third shots when he said: “I’m going to kill you mob.” 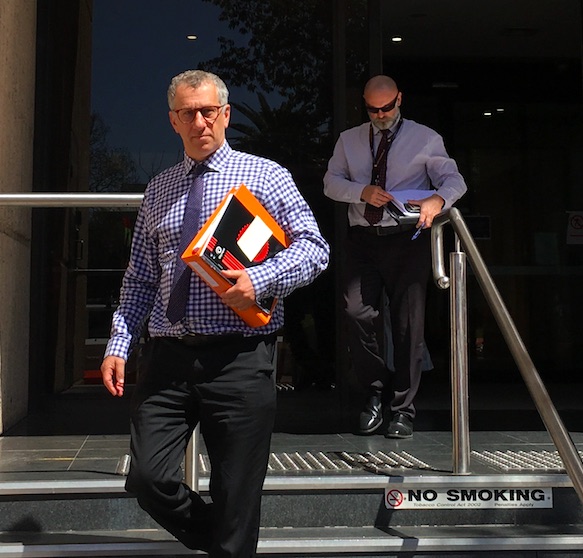 There is every difference between the first shot and the two that followed, responded Mr Strickland (above, archive photo; he appeared by video link today). And indeed, Mr Rolfe is not charged in relation to the first shot.

The lapse of 2.6 seconds from the first shot to the next was sufficient to allow Mr Rolfe to reassess his options and choose a less lethal means of responding to the situation, he said.

Further, he argued, Mr Walker had gone from being on his feet when the first shot was fired to being prone on the ground, on his right side, when the fatal second and third shots were fired.

At this point his left arm was pinned down by Mr Rolfe’s partner, Const Adam Eberl, who had his weight on Mr Walker’s torso. Mr Walker still had the scissors in his right hand but his capacity to wield them was limited by his right arm being partly underneath his body.

The jury would have to reject expert opinion of the evidence to find otherwise.

He said the civilian witnesses, whose evidence is based on what they were told and only in some cases what they claim to have seen, had no testimonial value in relation to reaching a conclusion beyond reasonable doubt. 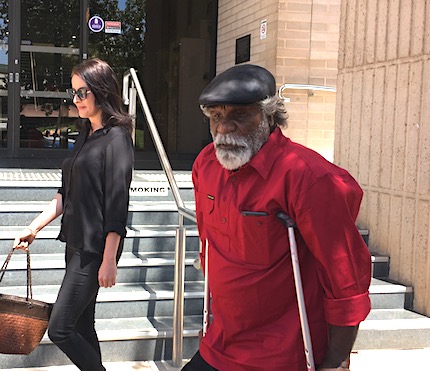 He also disputed the relevance of the arrest plan of the officer in charge at Yuendumu, Sergeant Julie Frost (which was to have Mr Walker arrested in the early hours of the Sunday morning). That would be more relevant to the coronial inquest, he argued.

Not so, responded Mr Strickland. Ignoring Sgt Frost’s plan would be relevant for the jury in assessing whether Mr Rolfe’s response was a reasonable one; failure to follow it showed that he limited his tactical options. He was determined to arrest Mr Walker that evening.

He was not content with the information he received about where Mr Walker would stay that night (in preparation for an arrest the next morning). When he moved on to the next house in search of Mr Walker, Mr Rolfe’s “state of mind was that the use of lethal force should be considered as a first, rather than as a last option”.

Mr Strickland said the evidence showed that on entering that house – before even encountering Mr Walker and his blade – Mr Rolfe had released the retention device (on his gun holster), preparing for a “fast draw” of his firearm.

As for the expert evidence, Mr Edwardson accepted it when it came to confirming the limitations of body worn video evidence – for instance, its distortions relative to what the human eye would see in the same circumstances, as well as the artificiality of examining it frame by frame.

It has to be examined in real time, he argued. His client would not have had the luxury “to press the pause button”.

Mr Strickland agreed that a jury would have to look at the video in real time but argued that it is “quite orthodox” to also consider it frame by frame, important in this case to determine the position of Mr Walker’s right arm and hand.

Mr Rolfe’s subjective belief about these questions was part of the legal test for his defence, but an objective test is also relevant, he said.

Further the evidence of the body worn video has to be considered with other evidence – in this instance, Const Eberl’s verbal evidence that Mr Walker was lying on his right side and his right arm was “underneath his body”.

(The body worn evidence in this case and detailed reporting of it are now subject to a suppression order.)

Mr Edwardson drew on the evidence of Detective Senior Sergeant Andrew Barram to argue that Mr Rolfe was acting according to his training when he drew his firearm in response to Mr Walker’s blade (the pair of scissors), as firearms are the best option for providing “lethal cover”.

Police are also taught to keep firing until the threat ceases, he said –  reading from the training manual which warns that ”five or six rounds may not stop an attacker on drugs” – and to fire into “the centre of mass”, in other words the centre of the torso, in order to have a greater chance of incapacitating the subject and to minimise the chance of missing and hitting an unintended target.

“There is not a single piece of evidence that the prosecution have adduced in this case that suggests that Zachary Rolfe did anything other than comply wholeheartedly with the very training that the Northern Territory police gave him.”

He dismissed the evidence of Dr Geoffrey Alpert – “the American expert who’s never before this case given evidence in an Australian court” – suggesting that he supported the first two shots as justifiable, being the “double tapping” that police are trained for. With the third shot fired .5 of a second later, a jury would have to find that his client’s actions went from “justifiable to unlawful in 0.5 of one second”, which would be “completely artificial”.

Mr Strickland said this was “misleading”. The first two shots could have been considered a justifiable “double tapping” only if both had been fired while Mr Walker was standing and after Mr Rolfe had been stabbed. 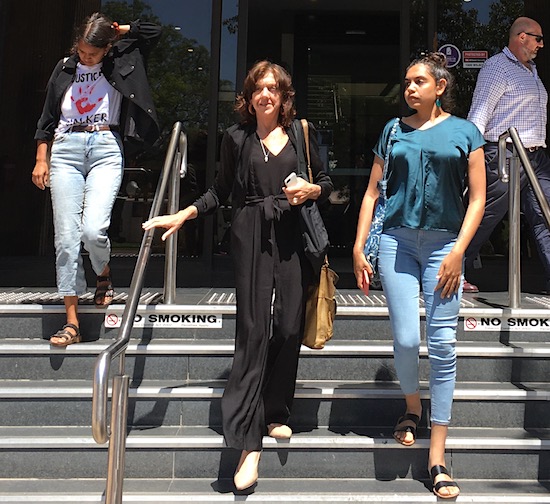 The problem is, he said, that Mr Rolfe discharged (for the second and third shots) when Mr Walker was on the ground and when he had the time (2.6 seconds) to go “hands on” or to use his taser, instead of firing two shots into Mr Walker’s chest at close range.

It was a “disproportionate” use of force because he had other options, argued Mr Strickland.

On the basis of Mr Barram’s evidence, he argued that Mr Rolfe was acting contrary to his training, for instance when he compared a photo of Mr Walker on his mobile phone by holding it up alongside Mr Walker’s face without restraining him.

Neither did he tell him to drop his weapon, nor warn Const Eberl about the weapon, increasing the danger to him. And he didn’t seek Mr Walker’s surrender.

“Mr Barram’s opinion was, or is, that the accused [and his partner] ought to have closed in rapidly, taken effective control of Walker, one arm each, to make an arrest without further incident.

“Or, alternatively, step back outside the house and engage in the containment, cordon contain strategy, that is part of the defensive tactics, and negotiate a peaceful solution. None of those things occurred.”

This was all “relevant contextual evidence,” argued Mr Strickland.

That Mr Rolfe did not consider his non-lethal options – in which the 2.6 second lapse between the first and second shots was critical, as was also Mr Walker’s position on the ground – could allow a jury to find beyond reasonable doubt that he did not believe it was necessary to defend himself by firing the second and third shots, and that it was not reasonable in the circumstances.

He submitted that Judge Birch reject the defence’s application that there is no case to answer.

Mr Edwardson had concluded by commenting on the “extraordinary” decision by police to lay charges against his client before an extensive investigation, on the basis of only the body worn video evidence. Mr Strickland, however, had said that the timing of the charges was entirely irrelevant to Judge Birch’s deliberations.

Judge Birch will rule on October 26, with all parties allowed to attend by video link. Mr Rolfe remains on bail at home in the ACT until that date.

Below: After the hearing police talking to community members gathered on the courthouse lawns. 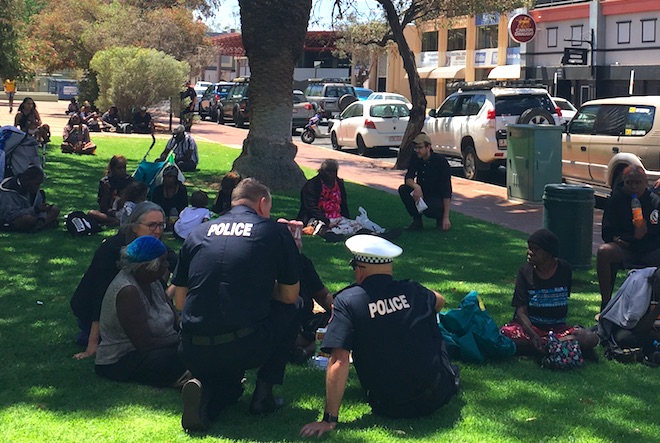