Community-based handymen to save money 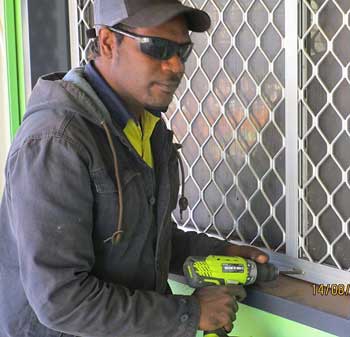 Sir ­– A new housing maintenance officer based at Papunya, also delivering services to the communities of Mt Liebig and Haasts Bluff, is helping to deliver quicker response times for housing repairs and maintenance in Central Australia.

The new contracts allow locals housing maintenance officers to carry out minor repairs like fixing doors and painting which is far more cost effective than the fly-in fly-out scenario that was previously in place.

For example, housing maintenance officers recently fixed a blocked drain in Mt Liebig, saving $1600 in travel expenses that would have been previously charged.

Employed by Ingkerreke Commercial, 28 year old Clayton has been working as a housing maintenance officer in Papunya and surrounding communities since July 7 and says the job was a dream-come-true: “People are starting to stop me when I’m driving past and telling me my sinks blocked or door won’t shut and I fix it or arrange for it to get fixed and that makes me feel very good and proud.”

As well as more jobs for local people, five Indigenous trainees have also been taken on under the new contracts in the Central Australian region.

It’s great to hear in Haasts Bluff for example, a housing maintenance trainee has been taken on by Ingerreke Commercial and has commenced his Certificate III in Construction through Charles Darwin University.