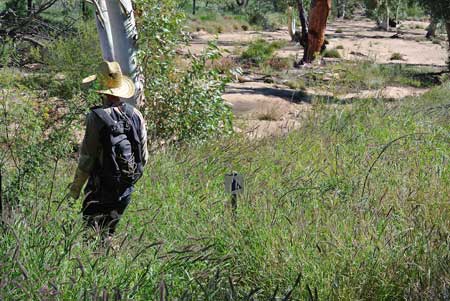 Two ministers with key roles in The Centre’s troubled tourism industry have declined to be interviewed about their failure to get visitor numbers up, and to arrest a major threat to the MacDonnell Ranges national park.

Tourism Minister Matt Conlan relied on a written statement, short on specifics, from a minder to respond to questions from the Alice Springs News Online.

Parks Minister Bess Price – the custodian of the tourism industry’s greatest asset, the West Macs – has made it clear she will do nothing about the avalanche of the invasive non-native buffel grass that is spreading through the best areas of the park.

Mr Conlan’s office, unsurprisingly, says there is no case for a government review of the chronically under-achieving yet highly funded Tourism NT, similar to the probe into Desert Knowledge, and Chief Minister Adam Giles would not comment.

The written statement on behalf of Mr Conlan blames “years of neglect” for the decline in tourism and asserts “it is not going to improve overnight”. No explanation was given for the failure of the CLP Government to make a significant difference in the nearly two years it has been in power.

Neither is the statement specific about the benefits of the AFL football matches in Alice Springs this year, staged at a cost to the government of $880,000.


The statement says, without giving details, that the matches “garnered significant media coverage across broadcast, print and digital mediums from all national outlets which cover AFL”.


No specifics were given to our question “what is shown or told about Alice Springs and its attractions in the media reports”. (The News sent this and other questions to Mr Giles as notes for an interview which he declined. The full text can be found here.)


Ms Price initially did not reply to an email seeking comment on buffel. This publication and many others have dealt with the threat posed by buffel, a declared weed in South Australia, and plant introduced by the CSIRO some 40 years ago to suppress dust.

Buffel is notorious for densely colonising the most fertile areas, burning very hot, with the result that native grasses, shrubs and ultimately, trees are destroyed, inexorably leading to a monoculture of buffel bereft of any interest to local and visiting nature lovers.

Buffel can be controlled best by spraying.

We emailed Ms Price with questions about buffel on May 20. When we received no reply we raised the issues with Mr Giles, following which we received a reply from Ms Price’s minder.

This response was highly inadequate and we sent follow-up questions. These were ignored by Ms Price. Late last week we asked for a 20 minute interview with her. It was not granted. (The full text of our email exchange can be found here.)

Minister Price is more occupied, judging by recent media releases issued on her behalf, with weighty matters such as these:-

• New shade structures at Howard Springs Nature Park meaning Territorians can now make the most of the rock pools while being sun smart.

• Encouraging everyone to make the most of the beautiful desert winter weather, joining a ranger on a guided family bike ride to Simpsons Gap this Sunday.

That’s today – and any participants will be riding between a phalanx of buffel on both sides of much of the track.

Meanwhile the Parks and Wildlife Commission, which claims the “223km Larapinta Trail has fast become one of the most popular long distance remote walks in Australia”, tells trekkers they will be fined $432 if they light small fires.

This is contrary to the exemption of “fires used for cooking or boiling water, provided the nearest flammable matter to the fire is more than four metres away” even on total fire ban days. 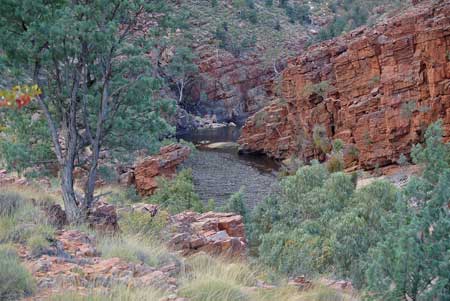 So while the town is desperate to boost its visitor numbers, the parks service is busy announcing not what you can, but what you cannot do, while doing nothing to combat the spread of buffel.

Ms Price’s minder emailed us that “buffel grass is not a declared weed in the Northern Territory” (which of course is something her government can change at the stroke of a pen) and that buffel “is seen as a valuable introduced species by many the pastoral industry”.

We would have liked to put to Mr Price that it is equally within her government’s powers to give pastoralists exemptions, provided, for example, they keep the invasive grass within their leases.

The minder also asserts that “without an entirely cooperative approach by all landholders in the control of this weed [the parks service] would not be putting their resources to the best use”.

This is clearly nonsense because there are several rural area landholders (including highly regarded botanist Peter Latz and the writer of this report) who have managed to rid their acreages of buffel while it is prolific on their immediate neighbours’ blocks. It requires a planned and persistent effort of spraying after rain over three seasons and then monitoring for any new growth.