Salt mine near Alice planned to be region's biggest private employer

Plans for an underground salt mine near the community of Titjikala, about 120km south of Alice Springs, have passed Tellus board approval as commercially and technologically viable.

Mr van der Merwe said if the project passes, Tellus will be committed to hiring as many locals as possible.

“Where possible, we have a policy of contracting local service providers and creating as many local employment opportunities as possible.” 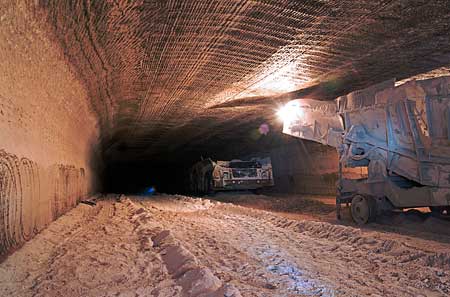 Mr van der Merwe said if the project goes ahead, Tellus will work closely with local organisations to get potential employees job ready.

The Social Impact Assessment, which will commence later this year, includes a skills audit, which will identify existing local expertise and identify skills gaps with the intention of training prospective employees to be job ready.

“We will provide a direct link between training and job outcomes,” says Mr van der Merwe.

Tellus Holdings has already hired 30 local companies – to a contract value in the millions – and has been impressed with the quality of service providers.

Not only will local employment have a positive impact on the local community, Mr van der Merwe said, it makes economic sense.

“The fly in fly out model other mines employ is expensive and as a company we have to bear the cost. It makes much more sense to employ locals and support a drive in drive out program.”

The initial lifetime of the project is 25 years, however Mr van der Merwe envisages the project, if successful, will continue for longer than that.

Having recently returned from a salt mine in Germany, Mr van der Merwe said projects such as these have potential to run for generations.

He says in Germany salt mining has the potential to generate a vast amount of small business enterprises, from salt speciality products such as salt lanterns, to furniture and art.

He even suggested the potential for “salt tourism” – one salt mining community in Germany attracts 20,000 visitors annually.

However, Mr van der Merwe says the project has yet to be financed, pass feasibility studies and get regulatory approvals.

“The project is moving in the right direction,” Mr van der Merwe says, planned to start construction at the end of 2015. He encourages interested parties and service providers to register their interest in working with Tellus on its website.