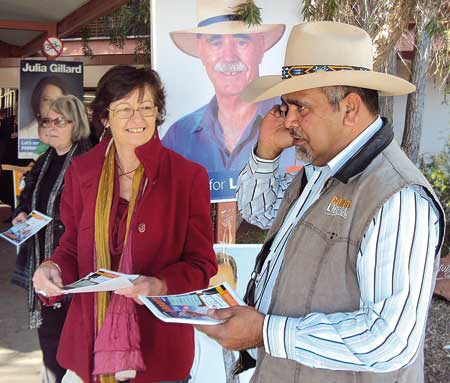 Well-known political figure Leo Abbott resigned from the CLP this morning to stand as an independent against Bess Price in Stuart, in the 2016 Territory elections.

Mr Abbott, an Arrernte man from Wallace Rockhole, says he is supporting the campaign of the three Aboriginal MLAs headed by Alison Anderson, who recently quit the party in protest over what they describe as the Giles government’s failure to deliver services to the bush.

Ms Price, a Warlpiri woman, remains in the government.

Mr Abbott, standing for the CLP, narrowly lost to Labor’s Warren Snowdon in the Federal seat of Lingiari in 2010. Mr Abbott says the voters of Alice Springs cost him the victory.

He says he supported Chief Minister Adam Giles when he contested Lingiari in 2007 but has since lost faith in the policies of the “blow-in”, including the “shocking” handling of the three defections recently.

The CLP member since 2007 says the focus of the government remains on the Top End, and Alice Springs, too, is missing out.

“We need action, not just nice words in media releases. We need people willing and able to sit down with us and talk with us frankly. And deliver the talk and the hype,” says Mr Abbott.