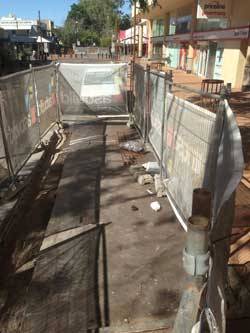 It’s not working: That pretty well sums up the views of traders in the northern Todd Mall following its refurbishment at the cost of $5m provided by the NT Government.

The Town Council’s mall promotion officer Marion Erlich is calling a meeting of traders for February 26 to get ideas: A ring-around to traders today has not revealed any.

Part of the worries are still ongoing construction work (two areas are being dug up right now). Some toilets were out of action for a day last week. A crew re-lining underground pipes requires intermittent traffic restrictions.

Could that not have been done during the extended construction phase, asks one trader.

But the fundamental problem is, not enough people are going there.

The new parking places in the Mall are useless, says one trader who spoke on condition of not being named, because they are limited to 15 minutes “and you can’t go shopping in that time span”.

Kate Freestone, who manages publicity for the Alice Plaza shopping centre, says the refurbishment of the Mall “has made no difference to trade”.

She says five of the centre’s 26 shops are empty: ‘We are negotiating some very attractive deals to entice some business operators to the centre,” she says.

Miss Freestone says progress is being made with setting up a coffee shop and restaurant at the main entrance (where the sails used to be): The impasse with the Town Council about a grease trap seems set for a solution, with a local plumber working on a quote, for the trap itself on Plaza land but connected to the underground piping on council land.
Miss Freestone also says there’s much discussion among centre tenants about increasing the connection with the new mall, with stores facing it having doors into it, an 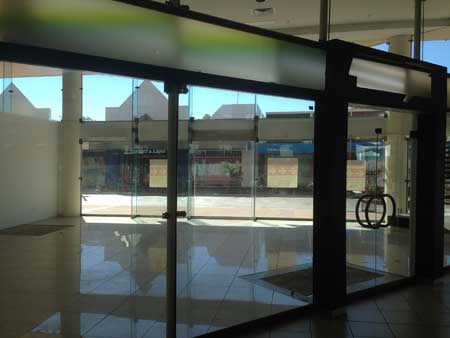 “We hope we can encourage the right businesses to open and operate out to Todd Street,” says Miss Freestone.
It is understood that the Town Council was urged by a consultant it had hired, not to embark on the Mall refurbishment unless the shopping centre agreed to become an integral part of it, rather than continuing to turn its back on it. If that advice was given, it was ignored by the council.

One trader says the nine months construction period was catastrophic – and now it seems it was all in vain as shoppers are still simply staying away. Instead of finally moving back into the black, she and her husband had to borrow more money just to keep the doors open.

She says there is talk about a couple of major chains not renewing their leases when their tenancy contracts come to an end, along with a local business.

She says a new coffee shop would be great because it would encourage people to “linger”.

PHOTOS: More construction work in the Mall. Empty shop at the main entrance to the Alice Plaza shopping centre.

By STEVE MENZIES Another big loss emphasised that Wests need help if it is to prevent the KFC Alice Springs A-Grade premiership from being a...
Read more
Issue 8

Youth bail: The other side of the coin

By JULIUS DENNIS When looking at bail law reform for young people, just how young these people are needs to be remembered and recognised. “We're...
Read more