Noted film maker Rachel Perkins (pictured) says she is not a director nor office holder of the company that ran the Mbantua Festival last year which still has substantial debts to artists and suppliers including her.

Neville Perkins and his daughter Krystal, who are directors of the Arrulka Business Aboriginal Corporation, have not replied to several requests for comment from the Alice Springs News Online. 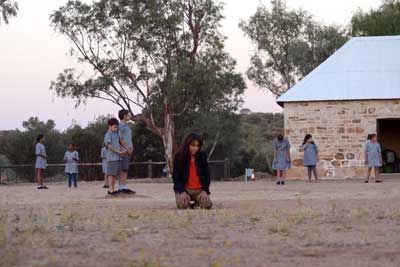 “One of my duties was to program the Festival artists and organisations. I worked to an approved budget where all the artists’ fees and services were provided for.

“It is extremely upsetting that some of these agreements have not been honoured and people, some of whom are friends, relatives and colleagues, have been left out of pocket,” Ms Perkins says.

Left: Perkins on the set for Bungalow Song, one of the festival’s major attractions. Photo by Alexandra Hullah.

“The Mbantua Festival itself was a wonderful success because so many people came together as partners and performers, and it could not have been achieved without the huge local support that was provided.

“To this end I will be working with other creditors to investigate further action that can be taken to recover the money owed to all of us.”

The Alice Springs News Online understands that the Department of the Prime Minister and Cabinet early in January corresponded with Mr Perkins about claims he had made to creditors.

The claims, reported by the News, made assertions which the government apparently denies, requesting Mr Perkins to urgently communicate that to his creditors.

These are the points the News understands were made by the government to Mr Perkins:-

• Incorrectly indicating that there were funds remaining to be paid to Arrulka Business Aboriginal Corporation from the Aboriginal Benefit Account. The message stressed that all funds covered by the funding agreement for the 2013 festival were paid out and no commitments were made for further funding. The grant was made by the Labor government which lost power in the September 2013 elections.

• Incorrectly attributing to the Government responsibility for a delay in payments to creditors of Arrulka. The note is understood to have said that $1.34m had already been paid to support the 2013 festival and that liabilities beyond this are the responsibility of Arrulka.

• Incorrectly claiming that unexpected changes in the Minister’s and Government’s time frames had delayed the processing of a further application for a $350,000 grant (which has since been declined by the Minister, Nigel Scullion).

• Claiming that requests for additional funding and the time frames involved are consistent with ABA processes.

• Incorrectly indicating that there were funds remaining to be paid to Arrulka Business Aboriginal Corporation from the ABA (noting that all funds covered by the funding agreement for the 2013 festival were paid out and no commitments were made for further funding).

The Department of the Prime Minister and Cabinet has given the following replies to the Alice Springs News Online:-

Three Aboriginals Benefit Account grants totalling $1,341,000 were made to the Arrulka Business Aboriginal Corporation during the term of the previous Government.

The Arrulka Business Aboriginal Corporation has, to date, complied with the reporting requirements mandated in its funding agreement. Financial reports demonstrate the funds have been spent on the Mbantua Festival.