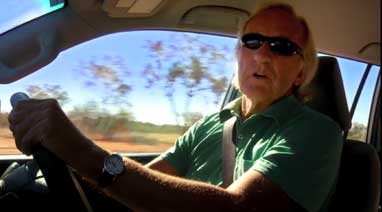 In a country where there are social security, public health and public education systems, it is not possible to talk about poverty without examining the term. Film-maker John Pilger (right) does. This is but one of the glaring weaknesses of his approach to the subject of contemporary ‘Aboriginal Australia’ in Utopia. The recently released feature-length film played to a packed house at Araluen in Alice Springs last Saturday night (picture at bottom). The screening was hosted by the NT Greens.

The film cannot rightly be called ‘documentary’ or ‘journalism’ if those words are still to have any standards attached to them. It does not ask questions, other than ones Pilger thinks he knows the answers to and to which he can lead his interviewee. It does not seek out or fairly treat a single dissenting point of view. It does not recognise complexity. It has all the irksome smugness – and the sing-song voice to boot – of a man in a pulpit who is quite sure of being right.

Aboriginal Australians are represented overwhelmingly as victims, none more so than the residents of the Utopia homelands in the Northern Territory. We see only the worst of their humpies and shelters, and they are allowed to take on representative status, standing in for other remote communities at a time when there has been an unprecedented government effort, however flawed, in remote housing provision. The only Aboriginal resident of Utopia asked to speak is shamelessly led to give the answers Pilger wants.

We see none of the recent investment in the area – for example, the multi-million dollar middle school. We are told nothing of household incomes (Indigenous households in Utopia – average size 5.6 persons – have a median income of $749 per week, according to 2011 Census data). We hear a lot about ill health and the threats to health from a health professional, but get no enquiry into why many Aboriginal people have not adopted the domestic and personal hygiene practices required for living in houses (it’s a little more complicated than having the hardware perfectly set up). We also do not hear at all about the health research that showed people from the Utopia homelands to be doing rather better than their NT remote community peers, with, for example, an adult mortality rate from all causes consistently lower by about 40%. This kind of information would be far too confounding for Pilger’s victim model. 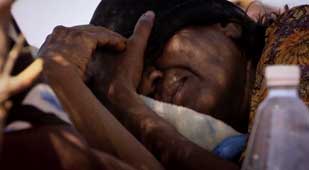 But more importantly than all of this, we get no real sense of what life is like at Utopia, of the resilient vitality and humour of many people, of the bonds between them, of their reasons, other than mute tradition, for choosing to stay. Pilger also shows his incomprehension of their attachment to their lands by his snide comments on the naming of Utopia by early white settlers who “either had a very acute sense of irony or were demented by the fury of the heat”. He sees the country itself as a hellhole.

On the other side of the mirror, he gives us a ridiculous caricature of white Australia. When it comes to housing, it is represented only  by fabulous wealth. The examples are a luxurious holiday rental at Sydney’s Palm Beach and the tree-lined streets of Barton in Canberra. No non-Aboriginal Australian is shown living in a sub-standard dwelling or on the street. There is no mention of the housing shortage and rising rates of homelessness across the country. We are just glibly told that non-Aboriginal Australians take for granted their right to a house. Houses fall on them, apparently, like manna from heaven.

When it comes to attitudes towards the nation’s history, it is not the people who live in the wonderful houses who get questioned, but rather the flag-waving hoi polloi wandering along the promenade at Circular Quay on Australian Day 2013. There’s reference to the “history wars” but only to one side, to those who denied the facts of forcible dispossession and other wrongs against Aboriginal people. You’d never know from Pilger’s film the serious debate and strong rejection that their denials engendered. 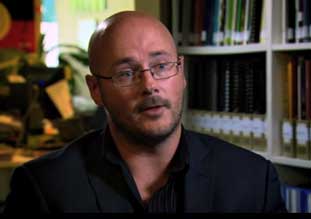 He does pick out a few lone white warriors who see things as he does: one is the reliably concurring academic Jon Altman, who seriously suggests that the problems may be beyond Australia’s capacity to solve; the others are the film’s associate producers, Chris Graham (right), former editor of the National Indigenous Times whose views still get an airing on Crikey, and Paddy Gibson, a university researcher best known for his anti-Intervention activism. Indeed, if you have read commentary on the Intervention by Altman and Graham, and media releases by Gibson on behalf of the Intervention Rollback Action Group (IRAG, Alice Springs) and the Stop the Intervention Collective Sydney (STICS), Pilger’s film will have no surprises for you. He could have written the script on their basis from his home in England and journeyed to Australia merely to get the pictures.

The Intervention is of course characterised as a frightening military-led action. Pilger wants to make sure that Bob Randall, speaking from Mutitjulu, gets this right (not that he needed much encouragement). This is but one example of Pilger leading the interviewee (he even does it to the experienced Aboriginal bureaucrat Olga Havnen, to her obvious embarrassment):

No questions from Pilger, such as: What did the army do? Did they carry weapons? Did they provide services for the community? Did they provide anything else? How soon did “everyone” return to the community? Instead, he narrates: “For the first time in modern Australia, the army was sent into black communities, as the spearhead of a government determined to control people’s lives and their land.” The footage, set to foreboding music, actually makes the point he misses. It shows a fleet of 4WDs, not military trucks. The Intervention in its initial phase was an ‘invasion’ by bureaucrats much more than by soldiers. 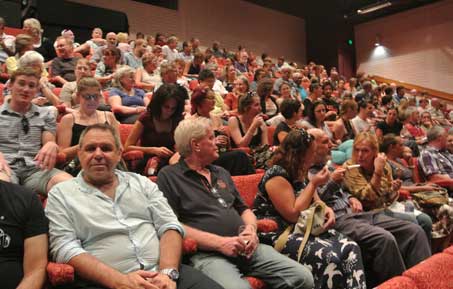 Pilger allocates an inordinate length of time to tearing apart all over again the ABC’s Lateline interview about child sexual abuse on Aboriginal communities, featuring an anonymous “former youth worker” whom Graham later exposed as Gregory Andrews, a public servant then working for the Indigenous Affairs Minister Mal Brough. Graham relishes going over this old ground, as though it were the investigation of the century. Meanwhile he and Pilger conveniently overlook other credible sources on the same issues, such as the then Crown Prosecutor in Alice Springs, Nanette Rogers, and Mantajara Wilson, a founding member of the widely respected NPY Women’s Council, whose views were later reiterated and defended by executive members of the council, Muyuru Burton, Margaret Smith and Yanyi Bandicha.

Graham complacently and gleefully concludes that there was “zero” evidence of the abuse of children and Pilger hammers this point with subsequent interviewees, including Brough. He fails to pursue at all the comment of Pat Anderson, who despite criticising Brough’s misrepresentation of the Little Children Are Sacred report, of which she was co-author, does say that it showed a situation on remote communities where abuse of children was “very likely” to occur. He also fails to discuss at all the serious and widespread issue of child neglect.

There can be no excuses for what happened to Mr Ward in Western Australia, Mr Briscoe in Alice Springs, Eddy Murray in Wee Waa, NSW and there are others like them. But Pilger just leaves us with their tragedy. And their apparent powerlessness. For the grand solution, pronounced sanctimoniously from the shores of Sydney Harbour, lies not in their hands but ‘ours’: we must “give back their nationhood”, whatever that means.

If you are looking for insights and a genuine focus for action, you won’t find it in this dispiriting two hour polemic.

Some Aboriginal men in the NT are recognising the need to do something about the terrible violence visited on women and children. See our coverage of their most recent initiative.

See lead article and comment on shooting the messenger, Gregory Andrews, in our October 26, 2006 edition.

For some idea of Mr Andrews’ contribution to Aboriginal policy debate preceding this controversy, see the lead article in our August 31, 2005 edition.

For an account of the arrival of the Intervention in the Aboriginal community of Amoonguna see ‘Getting to know each another’ in our July 12, 2007 edition.

By ERWIN CHLANDA The fixation on location for the Alice Springs national Indigenous cultural centre (as for the art gallery), forever on the drawing board,...
Read more
Issue 1