Hunter/gatherers vs the farmers

The little children are clever, Part Three (and final). See our archive for Parts One and Two.

Another bit of cultural baggage around Aborigines, education and work is the assumption that individual effort results in individual gain.  This is based on a farmer model of economic activity. This is one of the Big Ones. Pay attention here, because I am attempting to make visible some baggage you may have been carrying around for your lifetime. The invisible is very powerful, as it is unobserved and thus unchallenged. You keep carrying it, and meeting people unencumbered sends strange shocks into your mind: they demonstrate that there are other ways to live. Whitefellas are not at some pinnacle of evolution that all other cultures seek to attain. When we meet Aboriginal people, it becomes uncomfortably evident exactly what have we given up for what we have gained.

When I talk about cultural baggage, most of it comes from our ancestors undertaking farming as a means of production of life’s necessities for the last 10,000 years.  Then came the hyperdrive of the Industrial Revolution over the last 200. It’s no surprise to me that alcohol was the earliest and most essential technology developed by the farmers, and coffee by the Industrialists. The alcohol made it possible for big predators to live together by reducing stress.  Coffee matches the tempo of the new industrial era.

The people in central Australia are hunter/gatherers, and that system has completely different priorities. Their baggage is only what makes sense to carry through the desert.  In this part of the series, I will write about the sources of the two systems of values, and the consequences of their interplay. I am grateful to Paul Quinlivan, one of the great original thinkers in this region, and Andrew Stojanovski who had the wisdom to write Paul’s insights down in his excellent and amusing book Dog Ear Café (Hybrid Publishers, p 75). This model of analysis makes comprehensible so much that is otherwise incomprehensible about Indigenous economic practices. I attribute to it my own longevity in an arena that can burn people up. I give copies of Dog Ear Café: How the Mt Theo Program beat the curse of petrol sniffing to workers setting out beyond the boundary into that special centre of Australia that has always been Aboriginal country.

So farmers invest on a yearly cycle to produce the food they will live on throughout the year, and especially over winter.  Should a stranger arrive, they will not be welcomed as they represent another mouth to feed out of the finite resources gathered over the year. The farmers are protective of their resources, and sharing is counterproductive.

Let’s quantify the amount of personal investment needed to be a farmer. It’s hard work when it is time to prepare the field, sow the crops, harvest the crops. The rest of the year is pretty cruisy. There are ongoing chores, including feeding the domesticated animals, but there’s lots of time just hanging out with a ‘nonny nonny no’.

Work got much more intrusive once machines were created. As the plants and animals domesticated the farmers, the machines turned the farmers into robots to serve them. People now work more than in any other age.  We work more than the slaves of the Roman empire, but also look after ourselves. Our masters don’t even have to keep us any more: we keep ourselves. They don’t even have to enslave us: we do it to ourselves with debt. We are selling our souls wholesale, and it’s a buyers’ market. 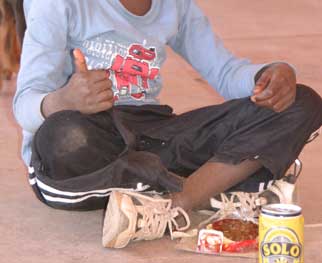 A hunter/gatherer has a different relationship to sharing.  Any resources gathered will not keep.  A kangaroo means feasting for a few days, but another one is needed after that.  An extra person is another hunter, another set of eyes, which improves the group’s chances of survival. Sharing increases the group’s chances of survival. The clever kids know this.  When their family has resources, they share with family, and when they do not, they are supported by family. Strangers are welcomed.  The boundary around Aboriginal families is permeable, and in fact, actively tries to draw you in. When they are humbugging you for a cigarette, they are hoping you may want to become part of their family. They are performing their most fundamental economic activity.

Let’s quantify the amount of personal investment in hunting and gathering needed to feed the family from a desert ecosystem, pre-whitefella. Anthropologists estimate four hours for men, eight for women. Per week.

It’s just not that hard to be a high order predator.  Look at lions and tigers. They sleep 20 hours per day. I have been hunting with Aboriginal men on many occasions.  On one, we had just gone for a walk to the nearby hill when we surprised a rock wallaby.  It was so frightened by our dogs that it dropped dead.  Lunch had just presented itself to us within a short walk from camp.  We carried it home – well, I did – and we made a fire.  While we were out, the women and kids had been strolling around picking up food. They found a lizard cache in a sand dune, and had pulled a few big sleeping ones out of a sand dune. Not too many. Mulga, the dominant tree form in the region, was producing seeds, so we had more home ground peanut butter than anyone could eat. The women got a few honey ants too but the kids ate them all. They got back by the time we had cooked the roo and we all settled down for some serious snacking. There was nothing else we needed to do for a few days, so we all chilled.

This was the baseline of Aboriginal economic activity before whitefellas.  Can you see why they might not be so keen on working nine to five, five days per week, week after week after year after year. As someone in Kintore said when asked about why they were not coming to work: “We tried work.  We didn’t like it.”

The cultural imperative is to share. If Jungala goes out to work with a shovel for the week, on Friday he is required to share his wages with the group. This is expected, and breach of this arrangement is considered the worst sort of greed and selfishness. As such, when Monday rolls around, Jungala may be inclined to let someone else go pick up the shovel.

I have heard Indigenous people talking about quitting work in the local store so they could “make room” for others who might want the work. The individual model of work to improve one’s personal position makes no sense in this context, and reliance on self-interest as a motivating force is consequently doomed.

No wonder the clever kids find whitefella exhortations to work and save for one’s own ambitions to be the worst form of short-sighted selfishness. They know the food they eat comes to them through family, not commerce. To them the connection they have with others is the strongest force in their universe, not attenuated to almost nothing as it is amongst the whitefellas.

You could say that the Aboriginal safety net was great at holding people up in the desert years, but now it holds people down. You can moralise about this fact, but there it is, for better or worse. A real understanding of this fact could prevent the endless recycling of failed ideas that become manifest at the cultural boundary, as we try to assimilate them while they try to assimilate us.

Maybe their ancestors were right about the whitefellas they first saw coming in on boats: they are ghosts. Souls sold to their masters, living to work and working to live, like the original zombie slaves of the Caribbean.

So the clever kids know what they would have to give up to become a whitefella, and embrace lifelong debt and wage slavery.  All they have to do is harden their heart and deny family. And it’s just not worth it. So they’re going to do it on their terms, bringing their families along with them as they all rise up together. Watch and see …