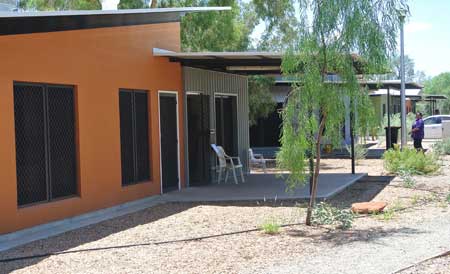 By ERWIN CHLANDA
(See update below.)

Stories about the abuse of public housing in Alice Springs have been notorious over decades. People from the bush given a dwelling in town, new or freshly refurbished: within days a horde of relatives descends upon it, the place is trashed, the furniture and fittings ruined, the neighbours are in uproar and the pollies are running for cover.

True, Aherlkeme isn’t exactly a buzzword around town. Even those using it refer to it as Percy Court, which you may not have heard of either, so it’s worth starting from the beginning.

Aherlkeme may turn out to be one of the Rudd / Gillard / Rudd government’s more enlightened Nation Building Stimulus projects, built for $8.3m.

Look left on your way to the airport, just before the racecourse, and you’ll see 28 new houses and units. Compared to many Aboriginal town camps, and the trashed ‘commission’ homes scattered around the suburbs, Aherlkeme is a paradise.

No grog, no rubbish, no overcrowding by humbugging rellies. Visitors have to leave before 9pm. They are not allowed to stay over night.

“Breaching” is the word for not sticking to the rules, not taking and passing the courses offered, and that means you’ve blown you chance for getting a publicly owned house.

The tenants sign an agreement, a code of conduct. “If that is breached, the bottom line is no house in town,” says program manager Judy Nagel.

At Aherlkeme, between the homes (one to four bedrooms) are large open-sided shelters, fire-pits, a gas BBQ and a children’s playground.

In the middle is a communal hall where earlier this week some role playing was staged which was a lot of fun, says Jean Ah Chee. The theme? What to do about a blocked toilet.

Ms Ah Chee, who until recently managed Aboriginal Hostels in town, now heads up the Mission Australia team teaching Aherlkeme residents  how to live in a house. Yes, it’s that basic.

Courses are also offered at several town camps around Alice Springs and in public housing in the suburbs.

Graduating from the courses given at Aherlkeme is becoming a condition for getting public housing (current wait list is 40) – and so is sticking to what has been learned there.

Another condition for getting a house would be a recommendation from a previous landlord – not something bush people are likely to be able to produce.

The official term for the work at Aherlkeme is “teaching life skills” and it starts from the  bottom: how to clean floors, how to use a washing machine, how not to forget putting out the bin for rubbish collection.

“We don’t do it for the clients,” says Ms Nagel. “We don’t push and we don’t pull. We walk alongside them.”

How not to get ripped off is another subject. There is a corner store that charges $7 for a liter of milk, says Ms Nagel: tenants are urged to give it a wide berth, and to shop at the big supermarkets.

She and Ms Ah Chee are clearly the new brooms, managing a staff of seven.

The facility opened on July 1, 2011 and the start was rocky. There appeared to be no time limit on the courses. Now it’s a maximum of one year, says Ms Nagel.

From the first intake of 26 households, 18 “exited” the program. It’s not known what they are doing and they cannot draw on the benefits from having been at Aherlkeme.

An exception from that first intake is Jack Jupurula Hayes, a dignified man who prior to becoming a resident lived rough in the ‘unauthorised’ White Gate camp, spent time at the Central Australian Aboriginal Alcohol Program Unit (CAAAPU) and got treatment for throat cancer – now in remission – in Darwin, and from Congress in Alice Springs.

He reports with quiet pride that he moved into his own flat in The Gap on September 10 last year, where he looks after himself.

Nevertheless, he’d spent more than two years at Aherlkeme, as appear to have all the other first termers who’ve now turned their backs on the program.

The new team is resolved to have a much more structured approach. A year is seen as the outer limit for training. Most residents are expected to catch on much faster, and make the transition to standard public housing more quickly.

Four to six months will be enough for many tenants, says Ms Ah Chee, to run through the courses of cleaning, hygiene including personal hygiene, shopping, visitors and overcrowding.

When a family moves in, the house is bare except for a metal kitchen cupboard, stove and sink, plus the bathroom with basic fittings. 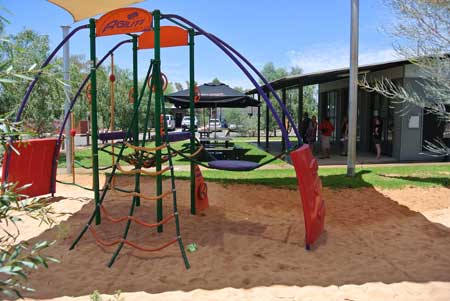 The program then provides chairs, a table, cutlery, crockery, beds and bedding: the family can take these away when it moves out into the real world, and a repayment schedule is set up.

The tenants need to buy for themselves any “luxury” items such as TVs. They pay rent set in the same way as in the Territory Housing system – pegged on the income.

PHOTOS: Part of the village • Mr Hayes • Role-play in the common room • Playground.

FOOTNOTE: The Alice Springs News Online has asked for the the annual fee paid to Mission Australia.

The department says: “Eight households have successfully completed the program since its inception and have or will transition into public housing.”

The program has now been operating for more than two and a half years, using 28 dwellings in the Percy Court complex.

Assuming that it takes 12 months to put families through the program – longer than deemed necessary for the most part, according to people running it – then 70 households should have graduated.

That means the success rate is a little more that 10% – or less, because some of the eight have not yet transitioned into public housing, according to the statement.

At the same time the department declines to disclose the amount being paid to Mission Australia for the running of the program: “Costs associated with this contract are commercial in confidence.”

When the News put the question to Mission Australia we received the following response from Suzanne Kendrick, State Leader NT: “Erwin, as you have been advised previously we are unable to disclose the details of the contract finances in relation to the running of Aherlkeme Village. Perhaps you should direct your energy to the Government Media Office.”
This is how the taxpaying public is given the run-around.

By STEVE MENZIES The first replay of the 2020 KFC A-Grade grand final between Federal Club Eastside and Rovers Complete Construction will be played from...
Read more
Issue 6

By STEVE MENZIES The 2021 KFC Alice Springs Netball Association season begins for the 71 teams across nine grades with 33 games. It will be a...
Read more
Issue 6

A touch of light: iridescent treasure