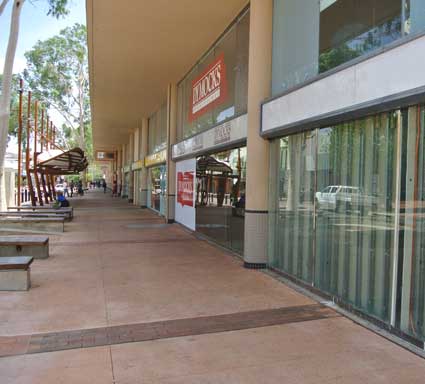 Will the Todd Street North side of the Alice Plaza open its doors onto the street following the revitalisation works recently completed there? This was one of the expressed hopes behind the works but it seems that the short answer is no.

There are big plans afoot for the present disheartening empty tenancies at the northern end (right, at about 2pm yesterday), but they don’t include fronting onto the street. Property manager Tony Bowes says “very confidential” negotiations are underway to combine a few shopfronts at that end into “one big lease”.

The plans also involve moving an existing tenancy from its present location to elsewhere within the Plaza. Mr Bowes declined to say what kind of a business the big lease would operate.

Inside, he hopes a “possible leisure / lifestyle” business will open in the premises where the music retailer Leading Edge used to be.

Plans for the important corner lease looking onto the intersection of Todd and Parsons Street have fallen over due to “red tape”, says Mr Bowes. “We couldn’t get past council on it,” he says, declining to be more specific. “We’re moving on.”

A possible cafe on the site is ruled out, he says. “At this stage”, the property can’t provide on that side the kind of facilities needed for a food service business.

Has the redesign work outside, with its aim of breathing new life into the area including by opening the street to two way traffic, had any impact on the Alice Plaza?

“Nothing noticeable,” he says, “but I believe it is a positive thing.”

I put to him an idea I have heard discussed, that is, redesigning the tenancies on the Todd Street side so that they are long and shallow, rather than narrow-fronted and deep, with one opening onto the street, and the other onto the interior.

He says he has never heard of such a proposal and that it would require a great deal of redevelopment.

Given the significant public investment ($5m to date) in the revitalisation work, does the Plaza have a responsibility to respond?

By ERWIN CHLANDA The fixation on location for the Alice Springs national Indigenous cultural centre (as for the art gallery), forever on the drawing board,...
Read more
Issue 3

By ERWIN CHLANDA The contempt of the NT political machinery for the public it is meant to be serving is becoming scandalous. Example One: A member...
Read more