Home Issue 1 A funny thing happened to me on the way to the tip...
Issue 1Issue 2Issue 3Volume 21 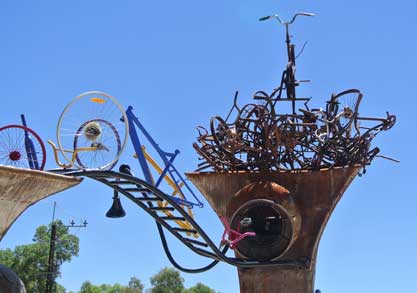 Driving past the new tip shop, having disposed of my ‘domestic waste’, my heart skipped a beat. I’d spotted a thing of beauty, a marvelous, playful, intriguing thing.

I pulled up. I’d been expecting something of the kind, having watched the update reports in the Town Council’s business papers for many months now. I knew it was called The Recyculator and that J9 Stanton (below, photo from our archives) was its creator. She’s a woman with an artistic finger in many pies: her creative endeavours, including sculpture, wearable art and culinary invention have consistently addressed the desert environment that she’s made her home, its inherent wonders and its new challenges. I knew too that the work had been through an expression of interest and selection process, as a public art commission always should, and that it had a decent budget. So I was hopeful. 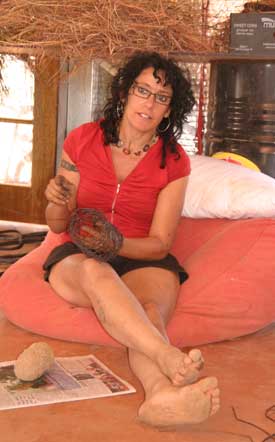 Hope rewarded. This is set to become a much loved feature of Alice Springs, something worth the detour, that you’d take visitors to see, take children to see and marvel at.

It expresses its ideas – the principles and possibilities of recycling – with imagination, clarity and flair. It is nicely complex in form without being overdone, honest and pleasing in its materials, excellent in execution, a delight to behold from all angles …

There’s a dance in the forms. At a distance they reminded me of the Red and White Queens from Alice in Wonderland. Up close the whole thing is like an ingenious invention of a nutty professor: rusty junk in, fanciful bicycle out, together with surprising by-products (the crushed glass at least being one that this tip does produce from recycled bottles).

It holds its own on the site. You can’t miss the gladness of it. It’s in a big space, with the large forms of the new tip shop (rather drab in contrast) and the waste mound to its west and north, yet it imposes itself. It is there for its own sake and not part of something serving another purpose.

It’s an expression of the creative spirit that should be allowed to imbue this town’s public spaces, that has some worthy forebears but has also been too often lost on poor processes, limited budgets and vision. As an iconic object, it sets a benchmark for future commissions. We don’t need look-alikes but we do need more work of this order, works of aesthetic accomplishment, ideas and ideals, that put a stamp on their sites, work that tells the world that here are peoples of talent, energy and ardour with great hope in our futures. 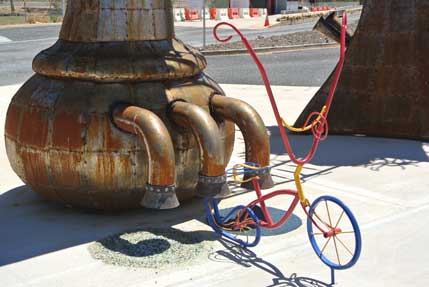 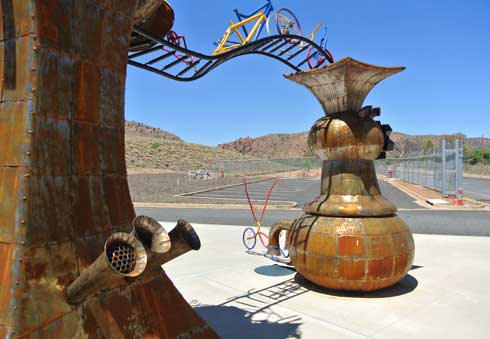 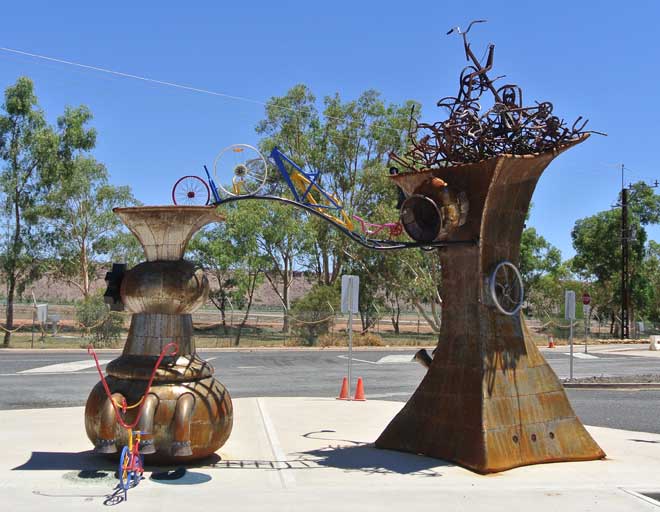 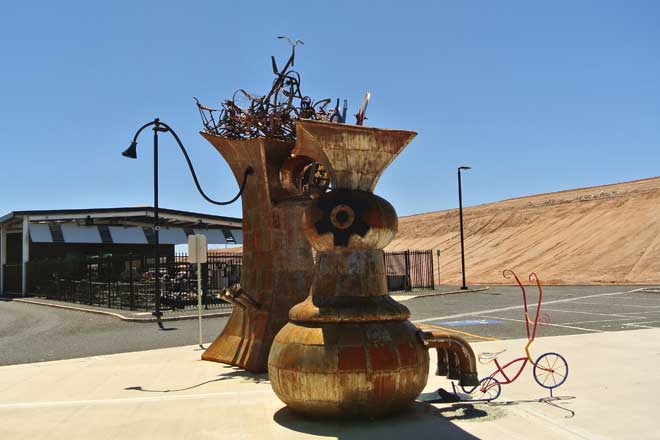