Women and children from Papunya. 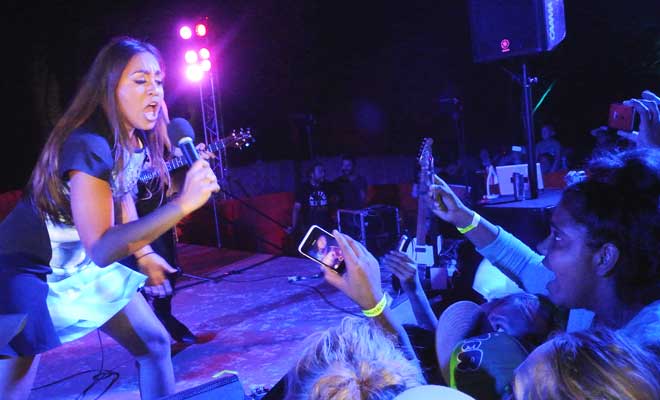 “Follow your dreams, work hard, explore the world! Run with your goals, take the opportunities, you can do it!”

All of the Mbantua Festival stars had the same message for their fans, particularly the adoring youngsters. From Aaron Pederson to Jessica Mauboy, they had their stories to tell of being one of “you mob” but of nurturing ambitions that have taken them out into the wider world.

Alice Springs-born Pederson (right) told the youngsters that they were the first generation to grow up with Indigenous people on mainstream TV. He has been at the vanguard: “Isolation does not diminish your dreams,” he said.

MC for the Saturday night concert, he introduced Dan Sultan, rock ‘n’ roll soul singer-songwriter (below right), “an Arrernte man like me”. Sultan is just back from recording in Nashville, USA. He’s doing a solo Australian tour, kicking it off with his Mbantua Festival appearance, before next year supporting the Australian tour of American superstar Bruce Springsteen.

The astonishingly dynamic Mauboy, on Sunday night’s finale, lavished love on her fans, touching as many clamouring hands as she could, donning their caps, sharing her microphone – of course they knew her songs by heart. She teased them, laughed with them.

The Darwin-born pop star, of mixed West Timorese and KuKu Yalanji parentage, also had a story of her roots, talking of a visit to Alice Springs when she was just eleven years old and of “Uncle” Warren H Williams giving her a chance to record a song. That was when she knew that singing was what she loved – it made her feel so good, she was determined to pursue it.

And along the way, even after her Australian Idol breakthrough, other unexpected opportunities have come up: Rachel Perkins, Mbantua Festival’s artistic director but primarily a film and television maker, offered Mauboy a role in Bran Nue Day; and this was followed by a role in The Sapphires. The “journey” has been “deadly”, Mauboy said with her wicked laugh, and it’s far from over. It’s “a big world out there” and she’s still exploring – she wanted to give her fans “a view” of that.

Like others, Mauboy got some local children to join her on stage, echoing an age-old tradition of teaching by example, as we had seen during the traditional dancing. The little band from Yipirinya School, of which she is an ambassador, were shyer than shy but no doubt it will be a moment that they’ll long remember.

Four young drummers from Drum Atweme helped Catherine Satour (above left) with a thrilling opening of her set. Satour has a strong record of mentoring behind her – it was she who came up with the Desert Divas concept to support aspiring female talent. Five young Divas, fresh from their Bungalow Song performances, got a chance on Saturday to do backing vocals for the delightful Missy Higgins. Warren H Williams had his daughter Cassandra (below) playing guitar with him – “her first big gig”. He also brought his son Nicholas onto the stage, to sing a moving song of the Stolen Generation experience.

All this points to Mbantua Festival’s goals: they go well beyond entertainment and even beyond a more than impressive, on the whole, display of Aboriginal talent and culture. There was also a clear affirmation of Aboriginal roots in their land and traditions, an emphasis on continuity, pride and possibility, a reflection on past history (especially through Bungalow Song) and, above all, a strong eye to the future.

It lies of course in the hands of today’s children and the festival generated a lot of opportunities for them: on stage and off, it must have been a wonderfully exciting and memorable experience – a great place from which to go forward. 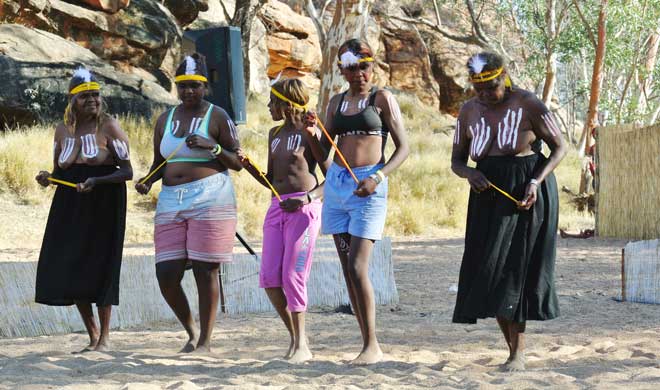 Above: Women and girls from the NPY Lands.

Below, from top:  Nicholas Williams • Young male dancers from Borolloola. • Members of Drum Atweme with the mentor Pete Lowson, on stage to open the Catherine Satour set.• Desert Divas on stage with Missy Higgins. • 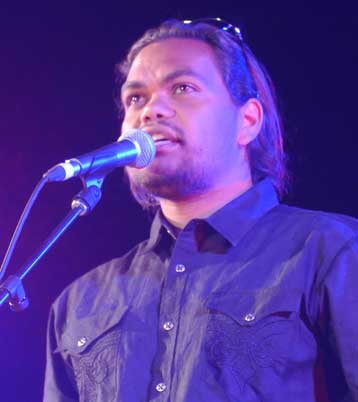 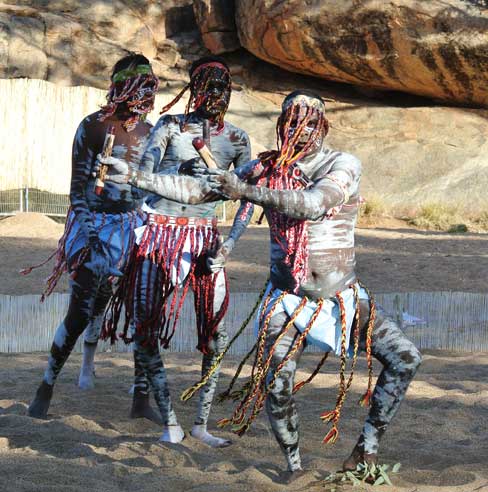