Bright students to take a hit in government cut-backs 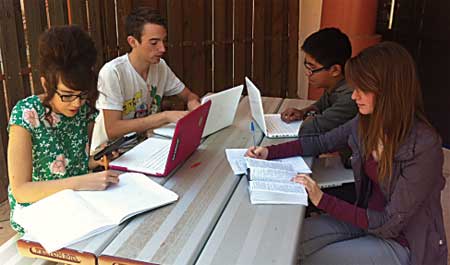 Specialist subjects will be taught mostly online instead face to face by teachers of the Centralian Senior College, and its Centre for Excellence, of which the school and its students are hugely proud, will also take a hit from the NT Government austerity program.

It has been portrayed as the “death of our education system” by public school teachers and students who protested outside the office of Chief Minister Adam Giles last month.

Now with year twelve subject selections coming out, the effect of the NT Government’s bid to remove “unnecessary” teachers and support staff is evident.

On September 27, Education Minister Peter Chandler sought to justify the policies in a media release: “NAPLAN test results showed the NT had the lowest scores in the country.”

However, the statement did not take into account that the Northern Territory has the highest indigenous population, in percentage terms, of anywhere in the country.

The release blamed social media for “increasing challenges in engaging students,” and claimed that by increasing funding and staff in primary schools, students will become better engaged and remain that way. In fact social media influences are not highly apparent until high school.

In July this year, Chief Minister Adam Giles refused the Gonski initiative, which promotes “more individual attention in the classroom … extra specialist teachers in areas such as literacy and numeracy … greater support for children with disabilities or special needs … additional training and classroom support for teachers”.

Mr Giles said “we will not sign up to a broken formula that would hurt so many Territory students”.

However the education reforms, removing a total of 35 teachers across the Territory, appear contradictory to this statement and will lead to the ultimate degradation of public school education.

As a result of these reforms, Alice Springs’ only public high school to cater for years 10 through 12 – Centralian Senior School – will possibly lose upwards of 10 teaching and support staff by the end of this year, none of whom will be replaced for 2014.

Subject selection choices for year 12 are reduced. Some Stage 1 and Stage 2 (year 11 and 12) courses are to be combined, and high level subjects such specialist maths, physics and chemistry will most likely be taught through the Northern Territory Open Education Centre.

NTOEC is a distance learning program focused on online work, which allows students just one hour per week of face to face teacher contact. It has never been used before by many students and there will be no time for students to adjust to this type of learning prior to year 12.

Willis Lee (pictured) is a Centre for Excellence student, who will be doing Specialist Maths, Maths Studies, Chemisty, Physics and Philosophy in year twelve.

Three of these subjects will be taught through NTOEC. Willis said he was “apprehensive of the results I will receive as I’ve had bad experiences with the NTOEC program last semester, in which I received an E grade.”

Willis is usually an A grade student. Centralian Senior College students Jessie Cutts and Lucy Blom also expressed their concerns, as some of their year twelve subjects (Philosophy, Modern History and possibly Legal Studies if it is offered) will be combined classes with both Stage 1 and Stage 2 students.

Such limited options are in no way the fault of the school, but a failure for the NT Government to allow for students to have proper access to the full range of subjects.

Many students who are unable to do their chosen subject, or are aware that participation through NTOEC will lead to a sub-standard result, will be forced to move to another school. In Alice Springs this means a private school. What happens to those who cannot financially afford this?

Alice Springs has the most to lose by the education reforms put in place by the NT Government. We have just one public middle school (years 7 through 9) and one public senior school (years 10 through 12).

Darwin, by contrast, has multiple public high schools. That means the effects of reform will be less drastically felt there than in a town with just one choice in terms of public school education.

As one of just five in the Northern Territory (and the only Centre for Excellence outside of Darwin), this is something the school is immensely proud of.

However, what purpose does such a program serve if the NT Government refuses to supply the in-school staff needed to adequately teach high level subjects?

The NT Government plans to invest in primary school education, whilst failing to adequately evaluate or compensate for the impact this direction will have upon high school education, especially in Alice Springs.

However, this is impossible without the support of the Northern Territory Government, and at the moment, this support is missing as Government officials turn a blind eye to the larger picture that is an accessible, high standard of education for all Territorians.

A demonstration in protest of Government cuts will be happening on Thursday (Oct 17) outside the Alice Springs Courthouse.

The Alice Springs News Online has asked the government to comment.

[The writer is a Year 11 student at the Centralian Senior College.]