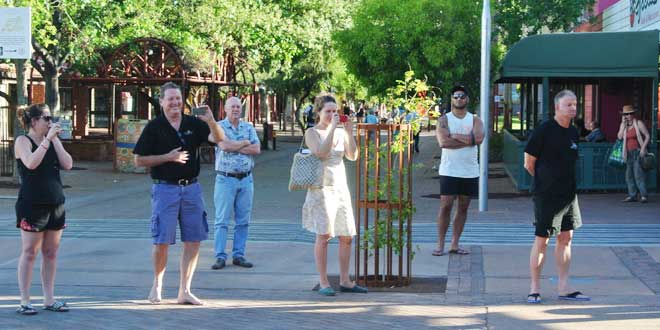 Most days after 5pm Todd Mall is largely deserted, with the notable exception of artists selling their paintings. Not yesterday though.

Once again, the EXTRA-ordinary Agency were staging an ambush of delightful silliness. This time Franca Barraclough and Melissa Kerl were joined by Doug Souter, the three rivalling one another in the execution of po-faced performances of “physical culture”. 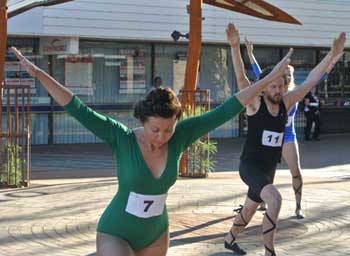 In truth, Kerl (in green) probably outdid the other two, having had the advantage of long practice. It was something she did in her childhood and the recorded music and compere’s voice sounded like a genuine artifact of another era.

It’s more about poise, posture and coordination than dancing. As the bemused artists on the lawns near Flynn Church commented, it looks “more like sports” – even if each ‘contestant’ had shown the expressive possibilities of routines described as “gathering nuts”, “the hunter” and “sewing the fields”.

Further up the mall, where the second art attack took place, visitors to Alice Springs who’d stopped to enjoy it, were nonetheless pretty sure the performers were “sending someone up”. 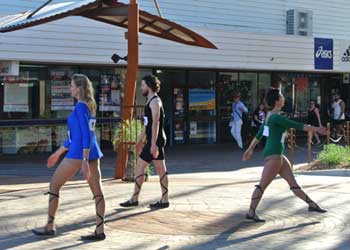 Did the performers have to get permission from council, they wanted to know, commenting that there seem to be a lot of rules and regulations – grandfather and grandson were obediently walking their bikes through the mall.

The recently renovated centre of the mall provides a pleasant gathering place, but it takes people and activity to give it life and meaning. The “live arts” of the EXTRA-ordinary Agency are making an excellent, madcap contribution.