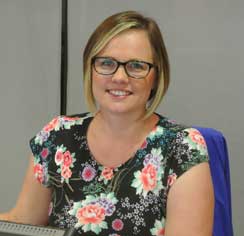 Far from addressing matters to do with the recent activities of Geoff Booth, the only question from the public put to councillors last Monday was about how council could address “the underlying causes of poverty and disadvantage in our community”.

The question came from Christa Bartjen-Westermann. She told the Alice Springs News Online that she was speaking as a private individual. However, her LinkedIn profile shows that she works in social services.

She had noted that Councillor Jade Kudrenko (pictured) had recently raised the issue, in relation to discussion of a proposed increase in fines for breaches of public places by-laws (driven by former Cr Booth). Ms Bartjen-Westermann said it would be a “win-win” way of tackling anti-social behaviour and wanted to know what Cr Kudrenko’s vision for council’s role would be.

Cr Kudrenko said there was one small way council could start. She asked Director of Corporate and Community Services Craig Catchlove if a meeting could be organized of social services in the town to provide their suggestions on “how we might be able to make some positive changes” as feedback on council’s Strategic Plan, about to go out for public comment.

Mr Catchlove thought that would be a great idea and he would ask for it to be done.

Later in the meeting Cr Kudrenko asked, as she has been doing over a number of meetings now, about council’s efforts on increasing Indigenous participation in its workforce.

CEO Rex Mooney reports each month on council’s Indigenous employment statistics. Council has an aspirational target of 20% Indigenous participation in its workforce, which, to the best of my knowledge, has never been reached. For the month of July 2013 the figure was approximately 14.38%. The majority, 20 individuals, are employed at the depot (outdoor workforce), with one at the Civic Centre, one at the Town Library, and one in the WMF (whatever that is).

Cr Kudrenko wanted to know if council had had “any contact with the RJCPs” with a view to engaging job seekers from the town camps. RJCP stands for Remote Job and Communities Program, the federal government’s one stop employment service in remote regions. In Alice Springs the provider of this program is Tangentyere Council.

Mr Mooney said that yes, council’s HR staff had made enquiries but there was nothing definitive to report. However, he pointed to council engagement with the police to provide youth diversion. “One young chap” is undertaking 30 hours of service at the moment.

Cr Kudrenko was pleased to hear that but emphasised the importance of engaging with people actually looking for paid work.