‘Have you got Bruce yet?’

“I was only in the front seat. Have you got Bruce yet?” These were among the very few words said by convicted rapist Norman Kernan to police after his arrest. They may contain a clue as to the identity of the third offender in the gang rapes of two European tourists in Alice Springs in May last year.

Kernan and co-offender Ginger Green – aged 18, 17 at the time – were last week sentenced to 15 years, nine years non-parole, for their part in the crimes. To date they have not given up the third man.

Kernan was the first to be arrested, at 1.10pm on May 2.  Initially it was for an unrelated matter. As I reported last week, in the weeks leading up to the rapes, he had committed a number of property and traffic offences.

CCTV footage captured at a service station at 2.20am on May 2, put him in the driver’s seat of the stolen vehicle, a green Toyota Corolla, in which the rapists arrived at Maconochie Road. The German tourist, the older of the two victims, had the presence of mind to note its registration number.

With his identification by a witness, the police at 5.03pm placed Kernan under arrest for unlawful use of a motor vehicle and sexual assault. He was cautioned and arrangements made for contact with an Aboriginal Legal Aid (CAALAS) lawyer. When he was taken to the cells, he wanted to know why he was still being kept in custody. He was reminded of the serious charges now against him and this was when he asked, “Have you got Bruce yet?”

This information formed part of the Crown facts as they were presented in court last week. The Alice Springs News Online has asked to be able to speak further to detectives about their investigation but, for the time being, permission has been denied.

In the late afternoon of May 3 Kernan sat through a recorded interview with police but exercised his right to silence. He made his offer of a guilty plea on October 11 last year, after his lawyer, now from NT Legal Aid (NTLAC), had received the brief of the Crown case against him. The facts admitted in court last week were largely reflected in his plea offer, according to his lawyer.

On the same day, May 3, police interviewed the fourth man who had remained in the car, apparently asleep, while the rapes were being committed. He told police that Green had picked him up in the stolen Toyota during the night of May 1-2 and, with others, they had been drinking on Anzac Hill. He got drunk, went to sleep and the next thing he could remember was waking up in the car with Green at Hermannsburg the next morning. Green had told him: “… we [had sex with] those two girls … at the golf course”, claiming that the girls had asked for it. 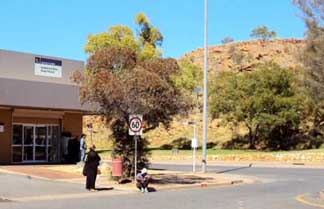 Green, who had been identified by his mother as in the stolen vehicle captured on CCTV footage, was arrested at Hermannsburg on the morning of May 4. Later that morning he showed police where the stolen vehicle was parked in the scrub. That was the limit of his cooperation until he made his plea offer in March this year. He declined to participate in a police interview.

Crime scene examinations of the Maconochie Road location and of the two vehicles revealed Kernan’s fingerprints on the Toyota Corolla; Green’s DNA on a cola bottle found at the scene and on a blood sample in the victims’ Pajero.

Vaginal swabs from the Finnish tourist also provided a DNA match for Green.

The Crown facts presented in court in relation to the investigation say of the third offender only that he has never been arrested or charged.

However, a third man, in fact a youth, did come before the court last year in relation to unlawful use of a motor vehicle, the same stolen car in which the rapists drove to Maconochie Road. He was already well known to the police and the courts – his file was inches thick.

This particular charge against him was only dropped on June 26 this year but he is still before the courts in relation to other matters that were already on foot at the time.

Crown prosecutor in the case against Kernan and Green told the Alice Springs News Online that the convicted men had not identified the third offender; the victims had been unable to; and no DNA evidence related to him had been recovered. A detective involved in the investigation said that for the time being all avenues of inquiry in order to bring him to justice had been exhausted.