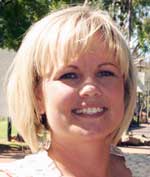 Coucillor Jade Kudrenko (pictured) says discussion about relocating the landfill is an example of “strategic foresight” which is a responsibility of the town council.

But she says she is reserving her opinion until a “fairly compelling case” is made for the move because a lot of money has recently been spent on the existing tip.

Also, a new site would need to be found. She said she would be interested in seeing a report from council officers.

Meanwhile Cr Chansey Paech (pictured) says he is “open to discussion with other elected members” should another site be identified.

There would need to be a full costing including of the transport to a site out of town.

“Another matter would  be coming up with funds to purchase a new site, which could prove difficult,” says Cr Paech.