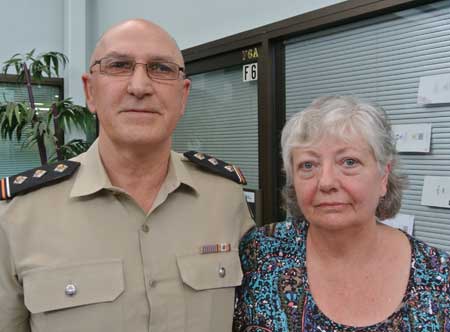 The Alice Springs News Online has received the following statement from Detective Superintendent Brent Warren: “Southern Investigation Detectives have completed an investigation into the conduct of Framptons First National Real Estate and liaised with the Department of Public Prosecutions. At this time no criminal offences have been identified against Framptons.”

Chair of the Board Suzanne Philip said such a finding by a disciplinary board is a serious sanction, however victims of the collapsed housing scheme, Framptons New Homes, present at the hearing, were not satisfied.

Before having to leave to attend to her young child, victim Amanda Abbott told the Alice Springs News Online that the reprimand is a “slap on the wrist. It doesn’t help us in any way”.

In the hearing and without being invited to speak, victims Alan Fisher and Denyse Thornton (pictured today) expressed their frustration.

Although no fine was to be imposed, Ms Thornton asked the board why the maximum fine allowed for under the Act – $7000 – could not be multiplied by the number of victims.

Ms Philip replied that the board did not think a fine would assist the victims, that their avenue of redress is in the civil court or under Australian consumer legislation. She stressed that the board could only do what it is allowed to under the Act.

To this Mr Fisher said: “More like a toothless tiger.” He said the value to victims of a fine would be “the satisfaction that [Framptons] would be punished.”

An apology of sorts was made to the victims as part of the accepted statement of facts. The apology was to any of its customers who did not undertake background checks into their builder in consequence of the statements made by Framptons in its advertising, as quoted in the earlier posting below.

Andrew Doyle and David Forrest, the co-directors of Framptons, were not present at the hearing. Framptons was represented by solicitor Peer Schroter of Povey Stirk. Mr Schroter left the hearing smiling broadly and did not speak to the victims.

Neither director was referred to during the hearing. Former Framptons employee Jeff Hardyman was named. Ms Philip, in making her remarks on the limitations of the board, said it had no jurisdiction over Mr Hardyman’s actions as he was not a licensed agent under the Act.

First National Framptons Real Estate has conditionally admitted to the real estate Agents Licensing Board that it  has breached a rule of conduct by “publishing an advertisement or other statement that was misleading”.

The condition is that the board makes only a finding of misleading conduct and  issue only a reprimand with no further action.

About a dozen families suffered substantial losses – estimated at more than $1m – when a scheme promoted by Framptons collapsed in March 2010. 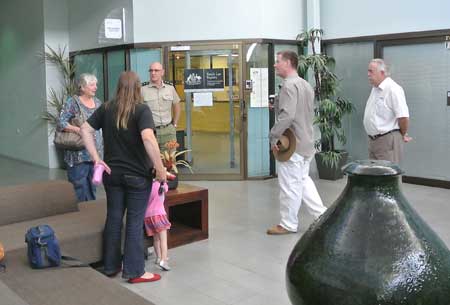 A hearing of the board starting in Alice Springs this morning follows events beginning in 2008 when the company advertised its “Framptons News Homes” scheme.

It was a project involving builder Randal Carey who has since pleaded guilty to charges of deception and has been sentenced to three years’ goal with a one year non-parole period.

In a statement of facts tendered at the hearing Framptons admits that they received a commission from the builder – which it said was “disclosed” – of $8800 per house or 3.3% of the contract price, whichever was the greater.

Mr Schroter this afternoon told the Alice Springs News Online that this is incorrectly reported (see his letter below). He said Framptons was to be paid that commission but in fact had received “significantly less”. He did not say how much.

Mr Carey told the Supreme Court that he had paid $100,000 to Framptons.

Mr Schroter says this “part of the transcript of [Mr Carey’s] sentencing was specifically redacted by counsel for the ALB upon submitting those remarks to the Board, as being unsubstantiated”. There was no information during this morning’s hearing about specific redactions to the transcript.


Framptons admitted to the board it had told clients it would “take care of … tendering (the construction work) to our panel of builders” and “work closely with you to finalise the design plan for quoting by our selected panel of builders”.

Framptons says Mr Carey was selected by “most of its customers”.

The statement says: “From the contents of the ‘Framptons New Homes’ publications, some customers believed that Framptons had undertaken appropriate background checks to confirm that Randal Carey / Carey Builders Pty Ltd was a competent and trustworthy builder” whilst in fact he was an “undischarged bankrupt” and was unlicensed during part of the project’s life.

The statement says: “Framptons accepts that it could have taken more care in the development and promotion … particularly to ensure that it and its staff clearly appreciated the extent and range of responsibilities.

“With hindsight, Framptons accepts that the statements … may have led customers into thinking that Framptons had undertaken the sort of background checks which a prudent homebuilder would have undertaken.

“However, Framptons expected its customers to make those enquiries.”

The company “apologises to any of its customers who did not undertake these background checks” and “undertakes to the Board to take greater care in these respects in the future and will implement a quality review process,” the statement says.

The board has retired to consider submissions made by counsel assisting it, Alistair Wyvill. It will return at 11am with its decision on whether it accepts those submissions or wishes to take the inquiry further, in which case Framptons will withdraw its statement of facts and contest the matter.

PHOTO: Victims of collapsed Framptons scheme outside the hearing room this morning. At far right, Doug Fraser, principal of LJ Hooker in Alice Springs, an observer of this and other proceedings concerning the scheme.

I refer to the report in the Alice Springs News Online today entitled “Framptons update: reprimand slap on the wrist, says victim”, at which I represented Framptons.

In that article, in the section entitled “From Earlier Today Modified at 1:24 PM:” it is stated that:-

“In a statement of facts tendered at the hearing Framptons admits that they received a commission from the builder – which it said was “disclosed” –  of $8800 per house or 3.3% of the contract price, whichever was the greater”.

This is patently incorrect. I understand that you were provided with a copy of the statement from counsel assisting the Inquiry Mr Alistair Wyvill SC. The statement in fact says:-

“In return, Framptons was to be paid a disclosed commissioned [sic] by the builder from the construction price agreed by the customer. The commission was $8800 per house or 3.3% of the contract price whichever was greater”.

This does not admit that Framptons was paid a commission (“admits that they receive a commission” as reported), but rather was entitled to be paid.

It is the case that Framptons was not paid a number of commissions by the convicted fraudster Mr Carey. Our client received significantly less than the amount Mr Carey’s counsel told the Supreme Court (which part of the transcript of his sentencing was specifically redacted by counsel for the ALB upon submitting those remarks to the Board, as being unsubstantiated).

We invite you to correct this error in updated versions of your online publication.

Peer Schroter
P.S. I left the hearing “smiling broadly” because that is my natural condition.