More than 4000 people – up on last year – came to see the Henley on Todd yesterday, or at least some of it, as the annual event entered its second half century.

It is all about racing boats that have no bottoms (except those belonging to the competitors).

Females don garments that are as gaudy as they are revealing. Normally earnest citizens turn into pirates, sailors, Vikings, drenching each other with hand-held water canons, racing in hamster wheels and bathtubs.

And of course, young and old compete in huge variety of water craft, to some degree similar to the real thing, except they are adapted for use in a creek that has no water in it. This is in contrast to the much more sober event, the Henley-on-Thames, the inspiration for the Central Australian regatta.

All profits (still being calculated) go to charity. The event in Alice is another triumph for local volunteerism.
There are no paid employees. 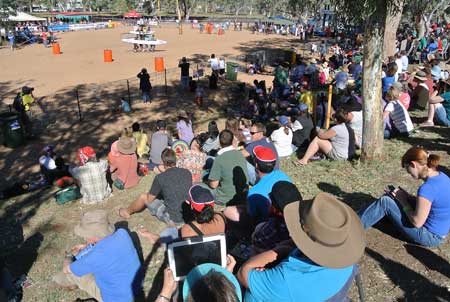 All work is done by members of the town’s three Rotary Clubs, Apex, Emergency Services and other volunteers, about 100 of them.

It is a red letter day on the tourism calendar but the locals love it, too. A survey of the crowd by the Alice Springs News Online, and covering 91 people, revealed that 61% were locals, 28% were visitors and 10% had come to town especially for the Henley (that makes the total number of visitors 38%).

Numbers in the VIP tent were boosted by 55 riders of red postie bikes from interstate.

Henley on Todd Marketing Officer Dianne Logan reports the crowd numbered just under 4,500 – 45% locals, 10% international visitors and the many from interstate, and 352 registered as competitors.

The popular BYO boat entries included teams from various local business, backpackers, interstaters, communities and sporting clubs. The winner of the race was the Pigs Can Fly team (pictured below).

The desert’s first international lighthouse, ‘Cape Todd’ had ham radio operators contact over 50 lighthouses throughout the world and another 50 more contacts were made to licensed operators around the world. Several have indicated their desire to attend the Regatta in 2014.

Event Commodore, John Bridgefoot from Rotary the pefect weather weather was perfect for the 45% locals, 10% Internationals and the many interstaters visiting the Alice to be part of the “52nd Henley-On-Todd Regatta”. The film crews came from Scotland and Victoria joining the 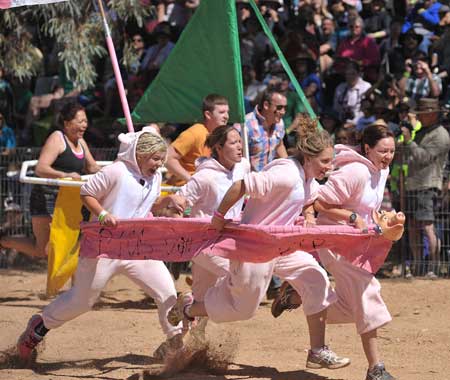 local crews to capture the moments and HAMBURGLAR arrived from NSW to entertain the little fun lovers.
Commodore John Bridgefoot’s Best Dressed on the day was The MUMMY from the Egyptian Team and the tug of war was won by the US Navy.

The event finale, the Imparja Battle Boat Spectacular, always a crowd pleaser, featured the Vikings, Pirates and Sailors taking to the high seas in the colourful and exploding finish. The “Vikings” fought gallantly with water bombs and cannon fire against the Navy boat “HMAS Courage” who performed admirably but the crowd favourite was the “Nauteus” as overall winners.