… but Cr Paech will fight on!


Cars in the new shared zone of the northern Todd Mall are OK but skateboards are not. The Town Council has installed skateable street furniture there but – for the time being at least – skaters are not to use it.

For that to change a majority of councillors would have to support modifying Public Places by-law 53 which bans skateboarding on footpaths throughout the entire CBD (the NT Government’s Traffic Act bans it on the roads).

A change to the by-law looks like it will be hard won. Councillor Chansey Paech was on his own at last night’s meeting in wanting to welcome skate-boarding in the mall.

Mayor Damien Ryan, having suggested at the council meeting on July 29 that skateboarding was a go in the northern end of the mall – “now a street” – and that any signs banning it should be removed from the area, last night said nothing.

Cr Brendan Heenan said he wouldn’t like to see a change: the elderly and people with children could be hurt if they weren’t paying attention.

Cr Steve Brown said he failed to see how skateboarding could be “conducted safely” in the northern mall, but acknowledged the “quite large contradiction” of having specially designed skateable street furniture there. Council would now have to reinforce the message that it is not allowed, he said.

Cr Geoff Booth said he agreed with Cr Brown. Cr Eli Melky said he supported Cr Paech but the majority view would prevail. Cr Dave Douglas said nothing but at the last meeting agreed with Cr Heenan. Crs Jade Kudrenko and Liz Martin were both absent. 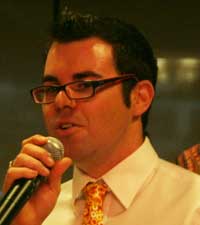 Cr Paech (at right) later told the Alice Springs News Online that he was “very disappointed” but he will not let the issue die:

“I strongly support the aspirations of local skateboarders to be able to use the board-friendly street furniture that has been installed in Todd Street.

“There has been a very positive reaction on social media to the initial advice that skateboarding was permitted in this area.

“Tonight I’ve put out a poll on social media to gauge community support for opening Todd Street to skaters, bringing some life into that end of the CBD and encouraging healthy activity.

“It’s a way for our community to reclaim our streets, making them active, vibrant, welcoming places.

(Drinking liquor in a public place is, however, also banned by the by-laws.)

Another move in relation to the new shared zone did get majority support from councillors: at present a 10km/h speed limit applies to the raised area only, marked by rumble strips at either end; otherwise the 40km/h limit applies. All councillors supported Cr Booth’s suggestion that 10km/h should apply to the entire strip.