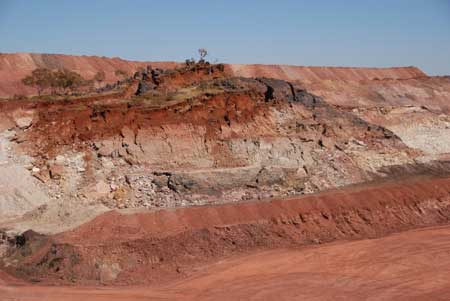 Sir,– The Aboriginal Areas Protection Authority (AAPA) is calling for miners to respect the law and honour their agreements, following the historic prosecution of a Singapore-based mining company for the desecration of an Aboriginal sacred site.

OM Manganese Ltd was today fined $150,000 in the Darwin Magistrates’ Court for one count of desecration to, and one count of damaging, the ‘Two Women Sitting Down’ sacred site at their Bootu Creek manganese mine on Banka Banka station, 170km north of Tennant Creek.

At right: The site damage seen from the Eastern rim of the Masai pit looking across to the collapsed bull nose which includes the registered sacred site. Photo courtesy AAPA.

Magistrate Sue Oliver said that OM (Manganese) had chosen profit before protection at its mine and had therefore contravened the NT Sacred Sites Act 1989.

It was the first-ever case of desecration to be successfully prosecuted under Australian law and was a timely (and precedent-setting) reminder that poor management and the disregard for important Aboriginal sacred sites would not be tolerated by the law. Most miners in the NT, however, are operating in a responsible manner.

Although Aboriginal custodians were greatly distressed by the site damage, they showed great faith in the court process and repeatedly travelled 1000km by road from Tennant Creek to attend the many hearings of the trial.

Yet little could be done to rehabilitate the sacred site as it had collapsed after OM Manganese continued blasting and excavating ore next to it, despite knowing that a collapse was imminent. Ultimately, the site collapse totalled 17,000 cubic metres of ore, soil and vegetation.

Under the NT Sacred Sites Act 1989 the site’s custodians are ineligible for any compensation and fines would go directly to the Northern Territory Government.

When a sacred site is desecrated or damaged it tears the social fabric of the affected community as the harmony of those people is inherently linked to that sacred site.

Sacred sites are important to all Australians as most of this nation’s cultural integrity, historical significance and tourism appeal comes from the 50,000 years that Aboriginal people have been caring for their country, their seas and their sacred sites.

This site has great significance to the custodians and relates to a dreaming story about a marsupial rat and a bandicoot who had a fight over bush tucker. As the creation ancestors fought, their blood spilled out, turning the rock a dark-red colour that is now associated with manganese.

Most Aboriginal people are not ‘anti-mining’ but they do insist that their sacred sites be protected: AAPA is the first point-of-call regarding the protection of sacred sites for anyone wishing to mine or develop lands or seas in the NT as we have, with the custodians, recorded where the sacred sites and significant places are, across the Northern Territory.