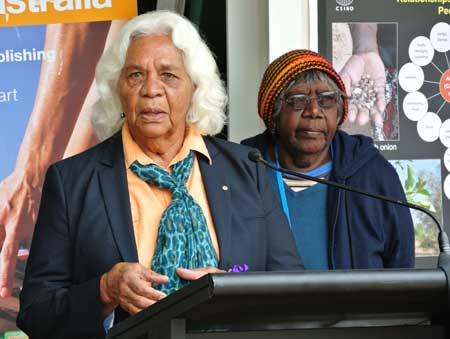 
If you’ve ever wondered about the extraordinary web of relationships among Aboriginal people of your acquaintance, about what is meant by terms such as cousin-brother, cousin-sister, or how your friend can call more than one person mother, including a younger woman, or how a man can refer to someone of their own age as grandfather, then this is a book for you.

It’s called Anpernirrentye Kin and Skin, with the subtitle Talking about family in Arrernte. Its authors are the well-known Eastern Arrernte senior woman Veronica Perrurle Dobson AM (pictured at the book launch with Margaret Kemarre Turner OAM ) and linguist John Henderson (pictured below) and it is the latest production of local publishing house IAD Press.

The book is said to be the first of its kind – not an anthropological or linguistic treatise speaking to an academic audience, but a carefully structured learning guide, primarily for people learning Arrernte, pitched at the secondary or post-secondary level. It reflects Mrs Dobson’s passionate commitment to her language, its ongoing vitality and to a greater understanding of it by non-Arrernte speakers.

It is also a book that the well-motivated general reader can work their way through. I have already experienced a number of my own confusions being clarified (or starting to be). A basic principle is that “if you use a particular relation word for one person, then generally you use the same relation word for their brothers and sisters (or just brothers or just sisters)”.

Things start to fall into place: the several “mothers” of my friend, all meye in Arrernte, include her actual mother and her mother’s sisters (her aunties in English). But what of her younger woman friend whom she also calls “mother” when she’s speaking English? They are not related ‘by blood’ but the younger woman belongs to the same ‘skin’ as my friend’s mother – so that explains it.

There are very helpful diagrams of Arrernte ‘skin’ relationships (“sections” when there are four, as for north-eastern speakers, “sub-sections” when there are eight) that allow you to see how they work from parent to child and child to parent. There’s also a very helpful table that translates the skin terms across the central Australian languages. For me, as a writer, the different spellings of seemingly the same word were clarified and it will be a resource to fall back upon. 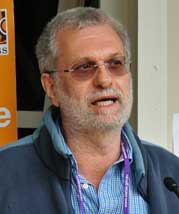 This said, the authors counsel against using the book as a reference tool as well as against reading it in one go, contrary what I have done for the purposes of writing this response to its publication. At each step of the way they suggest learning challenges, many of them involving the drawing of family trees (starting with your own) in order to get a more concrete grasp of the way things work. I hope I’m going to go back now and do this. At this point, I almost can’t imagine the mental agility involved in keeping track of all the ‘kin and skin’ permutations. As the authors themselves comment, “Amazingly, [Arrernte] people mange to keep track of all this as they move around!”

The IAD website also offers an audio guide to pronunciation of the relationship words in the book. Most of us non-Arrernte speakers stumble dreadfully over the pronunciation of Arrernte words we see written down. So it’s great to hear them and hear them repeated and to try pronouncing them yourself (it’s not all that hard, at least to have a go). Again, the usefulness of this for me goes outside the immediate purpose of the book.  It helps develop some confidence around how to approach Arrernte words that are more and more being brought to the fore in this town, for instance through place-naming.

It’s necessary in approaching the book (and language learning generally) to understand that a language expresses the ideas of a society. Arrernte relation words express the way Arrernte society works and do not necessarily translate neatly into English.  There is some discussion in the book of the ideas underpinning Arrernte relation words. One that is particularly interesting to me is around owning country, the relationship words that express this responsibility and the fact that people can refer to their country by relationship words used for their human kin. For instance, arrenge refers to the speaker’s father’s father and can also refer to the “estate” that is their father’s father’s country.

What does this mean for speakers who conceive of a place in this way? What does the fact that everybody is related, at least in the ‘classificatory’ sense, mean for the way people feel about one another, for the way they behave towards one another and generally? They are among the questions that arise, and there are some relevant preliminary discussions about closeness and the words for expressing it and ways of behaving with certain relations.  But it is only through talking with Arrernte speakers, developing relationships with them, and further learning (including reading), that deeper understandings will come. As the authors say, “A culture is a complicated thing!” The book opens up a toolbox. It’s for us to pick up the tools and start learning how to use them.

Note: Recommended further reading includes Margaret Kemarre Turner’s Iwenhe Tyerrtye – What it means to be an Aboriginal person, also an IAD Press publication. It includes a discussion about kinship between Mrs Turner and Mrs Dobson