Songman wants to be a political voice 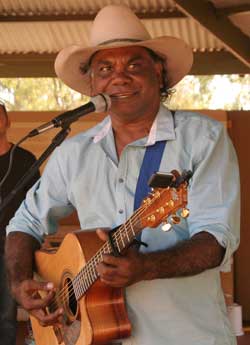 In some ways Warren H Williams seems singularly suited to be “the voice” for people who are “the last to be recognised” but the first to be the subject of “government experiment”. If he put his message to music, who could turn away from that husky, golden voice from the desert, that sings so movingly of “the hills of home”?

In Alice Springs at the launch of his run for the Senate today, on The Greens ticket, he rewarded his supporters with a few songs. What a treat! And he is thinking about composing a campaign song.

Is any of his existing repertoire political? I ask him.

No, his songs are “more about living”, “about enjoying the country”.

But in a way, that is what he’s on about politically, what he wants for people – to be able to live on their country and enjoy it. A barrier to that for increasing numbers, especially of older people, is the scourge of kidney disease and limited access to renal dialysis on their homelands. It will be one of the themes of his campaign: not only to get the machines out bush but to train up local people to operate and look after them, and care for the sick.

Another theme will be bi-lingual education, for Aboriginal people and other Australians. He says many of his whitefeller friends wish they had been taught Arrernte in school. Again, Aboriginal language speakers should be trained as teachers and employed. The Arrernte / Warumungu man has shown his commitment to his own Aboriginal languages with his 2011 album entirely in Warumungu, titled Winanjjara (Songman). He sang one of its songs today, “Lonely Boy” aka “Kirnawarinyi Kaarnungu”.

Not surprisingly for a Greens candidate he speaks also of the importance of land management. He seems to advocate self-help: “If the government doesn’t look after it, it’s up to us.”  For example, waterways: if they’re polluted animals won’t come to drink at them, and there’ll be no food for hunters. Again, he wants to see job creation for Aboriginal people as rangers. 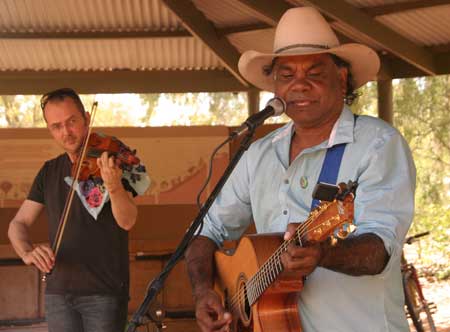 And what about existing jobs? Should Aboriginal people be obliged to take them where they are available?  With respect to casual seasonal work in horticulture ventures (the topic of recent articles on this site) he says many Aboriginal people could not freely go to work on other people’s country: “It’s not our place.”

Last time I spoke to Mr Williams was during the last NT election when he was running for the First Nations Political Party in the seat of Namatjira. He referred to the results in his brief launch speech. Territorians voted for people they thought would listen, he says: “Alas, that’s not the case.” His disappointment is not specifically with the bush members, but with the whole Country Liberals government: “They go out to communities and make promises but the promises are not kept.” For example? “They promised to fix roads, fix outstations but all the focus is on hub towns.”

Why has he returned to The Greens for this election (he ran previously for them in 2010)? He says he still likes what First Nations stand for but they have “a long way” to go in terms of supporting a campaign. As for the Greens, there’s a natural affinity: his totem is the caterpillar, “the green one”. And the party is providing funds that will help him take time off work and campaign in the Top End, in the major highway and bush communities over the coming weeks.

Above right: Derek Schild (left), a key early figure for the Greens in Alice Springs, providing more than moral support. Below: The small but keen crowd lapped up the sun, the songs and the message.