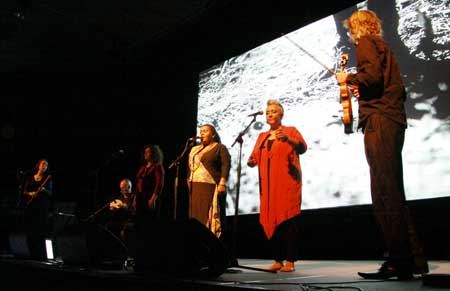 Music of the first birds at dawn, breath of the wind across the plain, the trembling of leaves, and then a human voice, rich and resonant, rising up like the lone eagle wheeling in the sky above, seeking its “far away home”. From its opening moments dirtsong caught the audience up on its wave of soulful soaring and searching. Three musicians, three wonderful singers, on a shadowy stage in front of black and white footage of “rock, tree, wind, sky”, of people too: “I am country, listen to me.”

Country here was singing its Aboriginal languages but also something of the universal language that ties all of humankind to the earth, our home. Little wonder that performances of dirtsong by The Black Arm Band have attracted such acclaim both in Australia and overseas. The presentation of just part of the work marked the 20th anniversary of the Native Title Act and honoured the memory of Eddie Koiki Mabo, the Torres Strait Island man whose successful claim in the High Court paved the way for the legislation. And it must have been a runaway highlight for the participants in the annual National Native Title Conference, held this year (and this week) in Alice Springs.

It was hard to come down from the heights of dirtsong to the “reasonably angry” language of Aboriginal activism, but its librettist, Alexis Wright, insisted. She and The Black Arm Band shared the billing for the conference’s annual Mabo Lecture, with Wright speaking both before and after the performance. She acknowledged the work’s triumph as a milestone in the Aboriginal struggle for “a degree of justice”, but she evoked with bitterness the “injury and loss” suffered by Aboriginal people as a result of recent government policy. 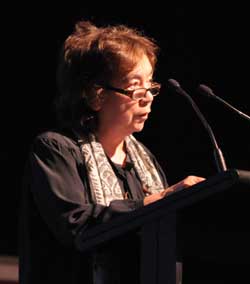 Wright (at left) is the author, among other works, of the multi-award winning novel, Carpentaria, but she is also a longtime researcher, social commentator and campaigner. As she sees it, the artistic achievement of dirtsong and The Black Arm Band can’t be separated from the affirmation of Aboriginal sovereignty.

“We’re often told our claims for sovereignty won’t feed people,” she said, but denying sovereignty has “not provided a banquet either”. She referred to the “highly pitched and hyped up assimilation policies that have continued to be developed and practised since Mabo”, to their “meanness and nastiness” that “has overwhelmed and shocked us”. This has been able to happen in part because Aboriginal people have lost confidence and skill in telling their own story, she said. They have been “bullied into silence”, with other people – “almost anyone at all” – telling their story for them.

“We are in the middle of a story-telling war aimed at the destruction of our rights,” she said. “The future requires us to preserve and rebuild our oral tradition of good story-telling practices.” She and The Black Arm Band are making an outstanding contribution, as are many other Aboriginal artists and thinkers, but Wright made it clear that these practices must extend into the practical political realm. She harked back to the Kalkaringi Statement of 1988, developed by the Combined Aboriginal Nations of Central Australia who demanded Aboriginal self-government and compensation for the “decades of enormous injury created by government policies”.

Some 800 to a thousand people from all the language groups of Central Australia were involved, she said: they knew their troubles and wanted to build a better future, with governing authorities defined by Aboriginal law. The billions of dollars that went into the NT Intervention should have gone instead on this idea. Now it should be revived and if nobody “rocks the boat” for fear that non-Aboriginal people “will turn against us”, then Aboriginal people will continue to be “the most over-governed people in the world”.

Wright called for an urgent inquiry, a Royal Commission, into the history of government arrangements for Aboriginal people and the billions spent, to see whether any of it has contributed to Aboriginal  “injury and loss”. 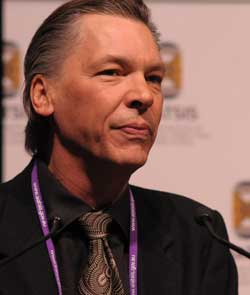 Wright’s was not the sole activist voice in a program otherwise largely shaped by the current architecture of Indigenous affairs with a focus on land title and rights. But Indigenous sovereignty, which she stressed as fundamental, as did Central Land Council chairman Maurie Japarta Ryan, was challenged by the international keynote speaker,  Robert A. Williams Jr. Williams (at left)  is described as “an enrolled member of the Lumbee Indian tribe of North Carolina” and is a Professor of Law and American Indian Studies at the University of Arizona, USA.

He argued that Indigenous people don’t have a human right to sovereignty but do have a human right to self-determination. He said there is no word for ‘sovereignty’ in Indigenous languages and assured the many Indigenous people in the audience that they wouldn’t want it. What would it mean practically? He gave examples: having to provide for military defence against Chinese invasion, coinage, postal services – “let the white guys do the tough stuff!”. But land use, planning and control, child welfare, language, education – these are things that Indigenous people can demand to have control over, that they have a right to pursue under the United Nations Declaration on the Rights of Indigenous Peoples.