Of real estate, roses and living in the CBD 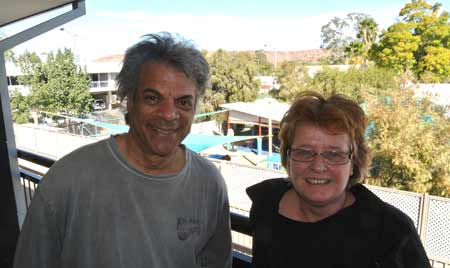 We left Alice Springs in 2009, after having lived here for more then a decade, because we wanted to buy a house and we were disgusted by the prices which had just gone up again, this time by 40%.

I had just sold a business in Alice and decided to invest somewhere else. Erwin Chlanda wrote an article about our departure, it was accompanied by a photo of us in the Mall, suitcases ready.

What the photo did not show was my bleeding heart. I’ve always loved Alice, and Alice had always been good to me. Yet I was going to betray her, because of her real estate prices and what you could get for them. I cried that whole first day of the road trip to NSW.

To cut a long story short: we’re back since 2012. We lost the business that we bought and the house that we bought in NSW and everything else we owned.  If I say “drug Mafia”, I probably do not have to explain more. If I say “Nimbin” you understand the whole story perhaps.

What is important is that we chose to come back to Alice to find work after disaster had struck in NSW. Work in Alice Springs was, as usual, found in a wink. Now we needed a house.

Buying was out of the question this time. I arrived in Alice in June 2012, six months before my husband, and lived in a share house until he joined me.

The share house was in a Sadadeen street that was described to me on numerous occasions as “a war zone”. I decided to live in this “war zone” just to check out what it would be like.

I had after all lived next to the river and opposite the salt bush for many years and had walked through it to take short cuts, also at night, only to be shouted at: “Hey sis, nice boots!” or “Want a piece of chicken, sista?” 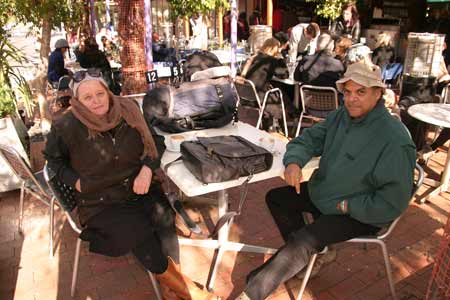 I had never locked the gates to my business, not even at night, and nothing was ever stolen except for an aluminium rose that was part of an art work. When I reported the stolen rose to the Alice Springs News, Kieran Finnane wrote an article about it and a new rose appeared out of thin air!

This was brought about by Mike Gillam in the Alice News of 23 October 2008.

The case of the stolen rose

Sir,– Re. letter to the editor pleading for the return of a stolen rose, one of three made from recycled aluminium cans by bulldozer driver, occasional sculptor and currently, law student at University of Adelaide, Simon Holding.

To create this exquisite vase of roses Simon painstakingly de-constructed actual roses and replicated them in metal, petal by petal. The artwork was subsequently sold during an exhibition of sculptures at the silver bullet cafe in 2006.

Simon was touched by the sentimental value placed on his work by local business woman, Suzanne Visser, and asked me to send her a replacement rose. He also offered to weld all three long stemmed roses and the vase to an appropriate counter, plinth or other heavy steel surface!

To the person who stole the sculpture I would like to add: there is a big difference between taking a flower from a garden and stealing artwork and hopefully this difference will tarnish you in the eyes of the recipient.
Mike Gillam
Alice Springs

After the story of the rose and my experience walking in the river and through the salt bush during my first time around in Alice I decided to ignore the “war zone” remarks and moved to Aneura Place in Sadadeen to wait for my husband to join me.

I decided to never lock my car and leave things in it overnight: small items like a jumper, some change, a half full pack of cigarettes, a bottle of beer, a new towel.

Not only did I never encounter anything that remotely resembled a war zone in that street, my car was never, not even once, opened. I checked this by sticking pieces of paper between the doors and the body of the car whenever I closed the unlocked doors.

It was an experiment. It went on for six months. In the end I was almost hoping that something would happen, that someone would at least take that handful of gold coins that were there in plain view … but no-one ever did.

I decided to tell this “war zone” story to the Alice Springs News as soon as it would be appropriate to do so. That time has come now. That unlocked car is not in that street anymore, it is somewhere in the CBD.

When the good old peaceful quiet share house days in Sadadeen were over and my husband and I were ready to rent a house together we decided it was going to be either “out bush” (Colonel Rose Drive and surroundings, Ilparpa, Ross Highway) … or the CBD. No suburbs for us this time.

The CBD is not what you call hip, but we would make it hip by moving there, we told ourselves. And the bush, well the bush has been hip for years.

The bush did not work out in time, there was nothing suitable available. So the CBD it was. People were listening with eyebrows raised to our plans to possibly rent in the middle of the CBD. “What about the noise, the fighting, the screaming, the vomit, the pee and the poo?” they asked.

We shrugged. Maybe we were again embarking on something insane, but this time we had nothing to lose. So we did not listen to all well meant advice and warnings and moved to the CBD. That was three months ago.

We hardly use the car. Woollies is our pantry and our freezer. Monty’s is around the corner. We walk to work. I have not encountered much noise, or screaming, vomit, pee or poo at all.

It’s a bit too quiet here in the evenings. If only everyone would come to the CBD we could create for ourselves a nice, convenient, cozy, hip town centre where businesses are open after 5pm and tourists like to dwell. There’s vacant land and buildings galore.

The CBD is not dangerous, I go anywhere, on foot, at any hour of the night, yes also to the 24 hour shop. I cross the Melanka site. Alone. A woman. At night.

And I dream of how nice it would be if people would live above all these shops, where now dark windows gape. If people would go out for a stroll and meet on the corners of the streets for a yarn. If there would be light behind these windows and shop fronts. If people would sit on their balconies watching the world go by.

Imagine an Alice with a CBD like Venice, where one can hear footsteps on the pavement and music coming from little cafes. Why not? Why not in Alice? We’ve got it all: the weather, the stars, the clean air, the international community, the empty buildings.

All we need is people. And you don’t even have to be brave. It is perfectly okay in the CBD.

Photos: Suzanne and Mike – sad to leave, happy to be back.