What the Mayor doesn't want to talk about 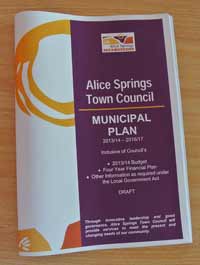 Alice Springs Mayor Damien Ryan is trying to keep the lid on events within the council which occurred since last Friday.

Information about the draft Budget was withheld – unnecessarily – from the public for three days, and there are indications that a serious rift has developed between the Mayor and the majority of the councillors.

A special council meeting last Friday was held in secrecy, but statements immediately before and since permit conclusions.
Mayor Ryan refuses to explain why budget deliberations were taking place behind closed doors. If meetings are held “in confidential” to conceal from public view tensions between the elected members that hinder the smooth running of the council, then these matters warrant examination.

The Alice Springs News Online enquired on Friday afternoon with the council’s media officer when that evening’s meeting would start.

It was clear, given the time of the year, that its purpose was to discuss the draft Budget. The response was that the meeting was “in confidential,” the News would not be allowed to attend, nor would  we be given any information immediately after the meeting.

At Monday’s media conference, the media officer told us, the draft budget would be released but it would be embargoed until Tuesday morning. This prompted me to send an email to the Mayor and all councillors at 1pm on Friday, making the following points:-

• As the draft Budget will be announced on Monday morning, clearly there will be no changes made to it at Monday night’s council meeting.

• So rather than delaying the news by three days, why not release the draft after the Friday meeting? I’m happy to be there.

• Only the Centralian Advocate will benefit from the embargo – all other local media will be disadvantaged.

I didn’t get a response and the councillors are sworn to secrecy about what happened on Friday night, but on Monday morning, just as we were heading off to the Mayor Ryan’s media conference scheduled for 9.30, we got an email saying it had been postponed till the following day. That’s when the cat leapt out of the bag.

We don’t lose a great deal of sleep when the Centralian Advocate misses a story: Apparently because of its new arrangements of printing in Darwin, its news deadline is Monday morning.

So the Tuesday press conference was of little value to them and they can’t run the budget story now until tomorrow. Our story went live in our online edition at 11am on Tuesday, less than an hour after Mayor Ryan’s news conference had finished.

What we do lose sleep about is when there is blatant manipulation of the media, and so I raised the issues at the media conference, much to Mayor Ryan’s overt displeasure. His answers were strictly broken record style.

NEWS: I understand the draft Budget was finished on Friday night.

MAYOR: No, no, we had a meeting on Friday night and the decision of that council was to release it this morning.

NEWS: That was not my question. When was the draft completed?

MAYOR: I think there were still some questions last night. It’s more the decision. The decision of the council last Friday night was to release it at 9.30 this morning.

NEWS: I’m trying to find out …

MAYOR: Well, I go back to that, the decision of council – which is all I can abide you by, Erwin – was to release it at 9.30 today.

NEWS: That’s not answering my question.

MAYOR: It is because the council makes that decision and the decision was to release it at 9.30 today.

NEWS: When was it completed?

So, that means the draft Budget was completed Friday night. The councillors could have decided there and then to take the matter “out of confidential” and the local electronic and digital media – and that’s all media except the Advocate – could have informed the ratepayers about an issue very much to do with their hip pocket.

We put to the Mayor that if there were still unresolved issues at Monday night’s meeting, as the Mayor suggested, then the media conference scheduled for Monday morning would have been premature.

MAYOR: No, I tried to do that for you, and the decision of council was to release it at 9.30 today.

So here we have it: The Mayor was for an embargoed release on Monday, which would have benefitted no-one except the Advocate. In fact he clearly had made arrangements for this, as the media officer informed us. But “the council” overturned these arrangements: Is it Mayor vs Council?

We’ve invited the councillors to cast light on this, put their positions. Transparency was a big issue at the last election: How did the vote on Friday night go? Why was the meeting held “in confidential” in the first place? Does the policy about confidential discussion need review? Is it proper to favour one medium over the others – these are some questions that need to be answered.

To manipulate the media so that all are dragged down to the level of the slowest is like wanting to ground jet planes and sending people off
in horse and buggy.