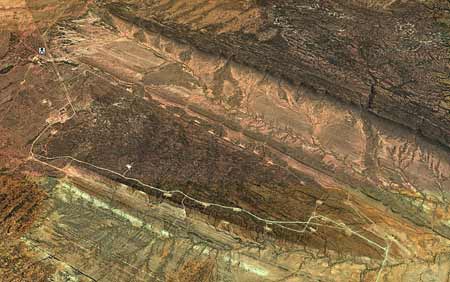 Corroded well pipes in the Mereenie oil field leaked oil below ground into the Amadeus aquifer which provides the water for Alice Springs, so did a leaking pipeline, and highly saline water – a usual by-product of gas production – was kept in an unlined evaporation pond.
These were issues raised by an NT Government water expert, John Childs, and others, from about 2001.
He says some of the problems had not been resolved at the time he retired in 2008.
The Alice Springs News Online has asked the Department of Mines for a comment but has not received one before the deadline for posting this report. We will publish any response if and when it is given by the department.
The Mereenie field sits on top of the aquifer and drilling for oil and gas needs to penetrate it to reach the crude and gas deposits below it.
The oil field, 250 kms west of Alice Springs, was and still is being operated by Santos, at first a partner of Magellan, now the 100% owner.
Santos is now planning to drill further wells at Mereenie.
Dr Childs says while the water auth

orities, of which he had been an employee since 1984, have a policy of transparency, the mines authorities do not, and little if any of the deficiencies at Mereenie  had been made public.
The faults had been assessed by various consultants, but his own quest for action to be taken were not followed up by successive mines and energy authorities.  Requests for information by others outside the government system have been blocked.
He says his efforts to bring the matters to a conclusion before his retirement had not been successful.
“I was chipping away at the mines department people but they did not volunteer information and did not press Santos to act on environmental recommendations,” he says.

“If the responsibility of monitoring had been with the water resources group the reports would have been in the public domain.”
When Dr Childs, who still lives in Alice Springs, retired he was a delegate of the controller of water resources. At various times he headed up the NT Government’s natural resources assessment division and was director of natural resources in the southern half of the NT.
IMAGES (from top): The Mereenie oil field; the location of the two oil and gas fields; the Amadeus basin (the left-hand – western – edge of the drawing is about 195 kms from Alice Springs. The basin, critical for the water supply of Alice Springs, is underneath the Mereenie oil field and extends further west by about another 100 kms.)