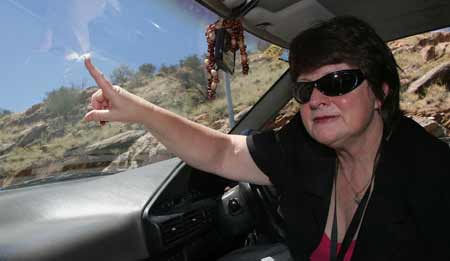 PHOTO: In 2007 Debbie King, a ward clerk at the Alice Hospital, drove her car on Wills Terrace past Anzac Hill (in the background of the photo) when a rock thrown from the hill crashed into her windscreen (see report at the bottom of this story). Five and a half years later, pelting cars with stones is a rampant as ever. Last week a tourist bus was attacked twice in the space of one hour, the second time when it was ferrying visitors from a restaurant to their hotel.

Alice Springs News report in November, 2007:
Debbie King, a ward clerk at the Alice Hospital, drove her car on Wills Terrace past Anzac Hill (in the background of the photo) when a rock thrown from the hill crashed into her windscreen.
With her was her daughter, nursing her three year old son. At Easter she had been in a car accident.
“It all came back to her,” says Ms King.
She stopped the car and challenged about six children scurrying around the hillside, hiding behind bushes.
She says they were Aboriginal children, judging by their accent “and what they called me”.
She says it took police about 15 minutes to respond. They had also  received reports from other people who had rocks thrown at their cars.
On her way home Ms King saw other cars “braking and weaving to miss rocks”.
She went back to the police, telling them “someone is going to get hurt”.
Police Superintendent Sean Parnell said: “Police received a number of reports of rock-throwing around the Anzac Hill area on Thursday night and did extensive patrols of the area.
“The problem with these incidents is the offenders are usually on foot and run and hide as soon as they have thrown a rock at their target.
“They are often – but not always – young juveniles who obviously treat what is ultimately a cowardly act, as some sort of game.
“Police treat rock-throwing very seriously and regularly mount special operations targeting groups of juveniles who are often the main perpetrators.
“We would encourage anyone who sees this sort of thing going on to contact police.”
Five and a half years later and nothing has changed.