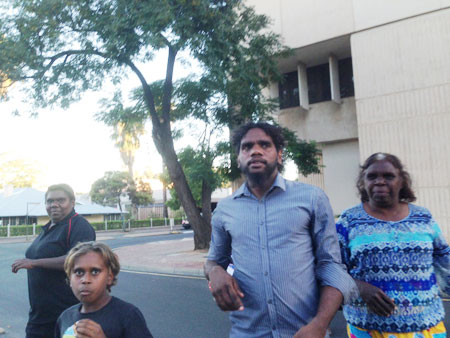 The jury in the trial of Liam Jurrah started early this morning but has still not retired to consider its verdict. Chief Justice Trevor Riley has been taking them through the things they must consider, in particular matters of law of which he, of course, is the judge. The jury however is the judge of the facts but in this too they have received plenty of guidance.

The difficult background to the case – the ongoing tensions between two family groups at Yuendumu – is something to be taken into account, said CJ Riley. Have the witnesses’ different relationships to one side or other of the conflict led them to consciously or unconsciously colour their evidence? Has it affected the impartiality and objectiveness of their evidence? Do they have an axe to grind or someone to protect?

On the other hand, being related or close to any of the parties does not necessarily mean they are not telling the truth, he said.

The Chief Justice also spoke about the possibility of witnesses reconstructing events, possibly as the result of the passing of time and the confusion of the night. Jurors could reject parts of a witness’ evidence without rejecting all of it, he said.

He said alcohol was a “big factor” in the case, as it is “regrettably in almost every case of violence we have in Alice Springs”.  The jurors need to think abbot whether it has caused confusion or affected perception and the power of concentration.

In all of this the most important thing the jurors can bring to their deliberations is common sense, said the Chief Justice.

He said that in the long experience of the courts, “mistakes in identification frequently occur”.  This happens particularly when the opportunities for observing events are quite limited. He directed the jury “as a matter of law” to scrutinise very carefully the evidence in relation to identity.

There is a high expectation amongst members of the public and the media following the trial of a verdict later today. The Alice Springs News Online will keep you posted.