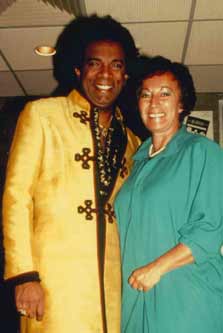 Sir – I first met Leslie Martin as she was then in 1969. She will mostly be remembered in Alice as Leslie Oldfield.
She came to Alice Springs with great secretarial skills which were eagerly sought after and gave her a broad role in the small outback town.
It had transformed into a modern thriving community when she left in 1992 to live in Apollo Bay as Leslie Huggins [where she died last year].
Her role as evidenced by her public achievements was considerable.
My late father, E. J. Connellan, of aviation and pastoral industry fame, employed and mentored her for 12 years.
Her roles in Connellan Airways, later Connair, and in the town as Mayor were of great benefit to the community. I am pleased to see her recognised in the New Year’s Honours, being awarded an Order of Australia.
She and her achievements remain understated. [She is pictured with Kamahl at one of her ceremonial functions.]
Chris Connellan
Narwietooma Station, via Alice Springs