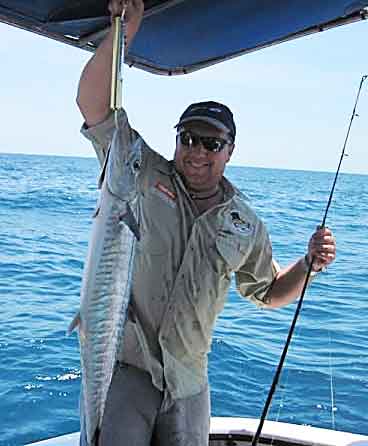 Michael Bridge (pictured), named by Chief Minister Terry Mills as the chairman of the yet to be formed NT tourist commission, says he doesn’t want to be known as the expert on the industry, but as the person gathering top experts around him in an urgent bid to re-invigorate it.

In an interview today with the Alice Springs News Online, Mr Bridge said he hopes the current CEO of Tourism NT (TNT), John Fitzgerald, to be replaced with Tony Mayell on December 1, will stay with TNT.

In what role will Mr Fitzgerald be staying?

“That’s yet to be decided. We strongly believe that John has done a very good job over the last 18 months or so and we hope he will stay with us.”

Mr Bridge said he is on the lookout for board members who are “enthusiastic about our tourism product. This is not about me and my ideas. My role is to get a group of people together, industry experts from the Territory and around Australia, put forward some recommendations to the Minister and provide some strategic direction to the executive of TNT”.

The Darwin vs Alice Springs thing is pretty engrained in our political life. Which one will have the majority on the board?

“But this is not at the expense of the Top End. We are still going to have requirements for a significant office in Darwin. It is the Minister’s intent to have the majority of [TNT] people in Central Australia.”

Is it the commission which will guide and instruct TNT?

Although the number of board members (likely to be eight), and the commission’s term of reference have not yet been presented to Parliament, “our intent will be to provide strategic direction to the CEO [of TNT] and to make recommendations to the minister”.

Is the chain of command going to be the Minister followed by the commission followed by TNT? “We’re just going to have to wait to see what the terms of reference are going to be” which will be coming before Parliament at the end of October.

Is there a draft? “Not that I have seen.”

Mr Bridge has been in the NT for 23 years, at Ayers Rock for 18 months and Alice Springs for two and a half years, before moving to Darwin.

Having seen the industry gyrating pretty badly, what are your views about getting tourism back on track?

He said the challenges are the extremely high Australian dollar, the Global Financial Crisis, the economic turmoil in North America and Europe.

TNT operates in an administration with a population of 220,000 and has a budget of $40m. The Queensland equivalent serves around four million people and gets $60m a year. TNT gets 12 times as much, per head, as Queensland, yet over the last 10 years tourism to the NT has about halved. Is that a sign of a well performing TNT?

“It is a bit unfair to compare state by state. Our product is significantly different and in some cases a lot more difficult to get to. This would be like comparing the delivery of health services in Queensland and the NT.”

Inbound tourism in Australia in 2011-12 has been on the rise – up 5% from all destinations, 18.9% from China and 9.6% from Japan but we’re not getting any of that action. Why? Is that a question for Mr Fitzgerald?

“We won’t be asking John Fitzgerald the question but delving into the issue with a group of experts. We’re acutely conscious of the growing Chinese market … but none of these things happen overnight.”

Mr Bridge says NT tourism is estimated to be worth more than $1b.

“The economic benefits of tourism in the NT are significant. Getting this right and moving forward with a united voice, supporting both the Top End and Central Australia, is vitally important and that’s what I’m looking forward to doing.”

Both new tourism supremos announced so far by Minister Matt Conlan are Darwin-based although portions of Tourism NT, including new CEO Tony Mayell, will be moved to Alice Springs – where the organisation was located for many years.

Tourism Central Australia (TCA) chairman Jeff Huyben has not returned calls from the Alice Springs News Online, but a local tourism figure, Deborah Rock, a former member of the TCA board and an unsuccessful Labor candidate in the August 25 NT elections, says it is still premature to criticise key people.

It will be interesting to see who else is appointed to the Tourism Commission to be set up, she says.
Mr Conlan yesterday nominated Michael Bridge (pictured) as its chairman.

He is executive chairman and a shareholder of Air North, according to the regional airline’s website.
The other shareholders are Roger Leach, a director, and John Gamble, the finance director.

Mr Leach is a self-made businessman and Licensed Airframe Mechanical Engineer who arrived in Alice Springs in the 1970s with little more than a toolbox, and founded a significant aviation business.

It does not fly to Central Australia, having recently cancelled its Tennant Creek run.

Tony Clementson, whom Mr Conlan appointed as his Ministerial Tourism Advisor, contested Fannie Bay for the Country Liberals in the elections, losing to the ALP’s Michael Gunner, 2263 votes to 1724.

Mr Clementson has been the general manager of Tourism Top End – the Darwin-based opposite of TCA – for more than eight years.

On the web he invites people to contact him for “career opportunities, consulting offers, new ventures, job inquiries, expertise requests, business deals, reference requests and getting back in touch”.

CLARIFICATION: Air North stopped its flights to Tennant Creek in 2003, not “recently” as stated above.