It pays to read the fine print: were First Nations fear-mongering? 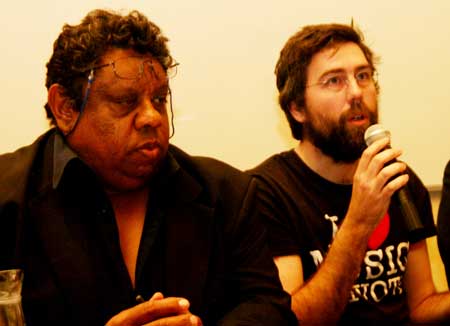 “They will take your vote, and take away your freedom! Lock you up, and give your children away! Make you pay for living on your land! Make you pay rent forever! Kick you out of town after taking your money! Control your Governance and say they now what’s best for you!”
That was the fine print on the back of the First Nations Political Party how-to-vote cards, a lot more dramatic and threatening than the spoken statements of Ken Lechleitner, co-founder of the party with Maurie Ryan, whom we have quoted in recent articles. (He is pictured at left, with candidate Edan Baxter who has since resigned from the party).
There’s been no complaint to the electoral commission, and even if there had been, it does not have the responsibility to “police truth in advertising”, a spokesperson told the Alice Springs News Online.
The media does, however, so the News asked Mr Lechleitner if these messages to voters could be substantiated.
He answered with an over-riding question – “What autonomy do people really have?” – and went on to explain, in fine rhetorical style:
“Life, liberty and estate are fundamental to being part of a society, being able to participate in a society. These things are denied to a section of the community. They are over-ridden, railroaded. They can’t get involved in the economy because they can’t use their land as collateral. If they could, they’d be able to participate, they wouldn’t have to be begging.”
This point about land has been his central theme and well covered. Lack of individual control over the land is what he, at least, is referring to in relation to freedom. But what about the second point, the spectre of people being locked up and their children given away?

“Look at the plans of the other parties!” he says. “They are going to clean up the streets, clean up the parks – which group of people are they targeting there?
“Locking people up, isn’t that’s what being done, with the soft form of mandatory sentencing that’s going to be introduced? In another year, people will realise what they’ve done.”
At the same time he welcomes the result of the recent Territory election, for the way that it has shifted voting power to the bush: “It’s fantastic, people will be able to hold the party in power to account to deliver on their promises. It will be a really interesting four years.”
But back to the point about children: “The whole Intervention is built around that issue. This is a call for us to wake up, what do we do now? There’s a lot of futuristic thinking happening but not on our side. There are 2010, 2030 documents but what has been Aboriginal people’s participation in those?”
Is he or the party suggesting that children not in vulnerable or damaging situations are being removed from their families? 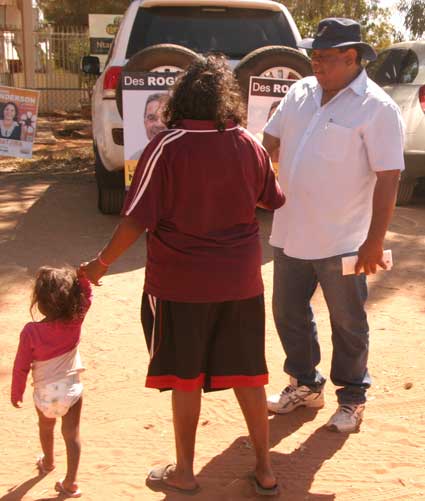 He seems to acknowledge a problem: “In some cases parents aren’t there, they’re dead and families can’t do it, can’t care for those children.
“I’m not blaming anyone, what happens is for a good reason, but does it have to be like that? We’ve got a lot of waking up to do about what we need to do and improve. The responsibility falls on us.”
It all sounds more reasonable when he speaks to it. So why the alarmist language on the how-to-vote cards?
“We can’t force people to think in strategic way,” says Mr Lechleitner.
Moving on: what about people having to pay for being on their land and paying rent forever? All over Australia people who live in public housing pay rent. Is he suggesting that Aboriginal people should live in public housing rent-free?
No, his point is again about people being able to raise money by using their land as collateral to build their own houses, and then pay rates for municipal services.
And people being kicked out of town after their money’s taken – what’s that all about?
“Getting rid of drunks from parks, from public places – what’s that saying? You’ve got no space, you’re not welcome anywhere around town. You can purchase your drink but when you go round the corner it will be confiscated. Where does that leave everyone? It’s a very, very sad situation.”

So, on the final point about governance, is that about the imposition of the shire model?
The creation of the shires should have been celebrated as a move towards inclusion, says Mr Lechleitner: “It could have been about bringing remote communities out of a stand-alone Aboriginal governance system into the Westminster system, but it was not promoted in a positive way. That philosophy of government is a good thing, but the process hasn’t been.”
He’s reluctant to get into detail, saying that the other parties have “plagiarised” FNPP’s ideas: “The litmus test will be how well they are executed.”
He says no-one wanted to touch outstations when he campaigned in the Federal election, but “now they are the flavour of the month”.
But how will they be funded, he wants to know: “Will government pilfer the Aboriginal Benefit Account – in another example of ‘we know what’s good for you’ – or will money be allocated from the NT Government budget?”
On the shires, he says they need to be restructured to deliver greater autonomy to local decision-makers. He says “the representative structure exists, all we have to do is adapt it”. The detail, however, is “our secret”.
Meanwhile, Edan Baxter, the First Nations Political Party candidate who stood for the seat of Araluen in Alice Springs, has resigned from the party. He says he feels that it is best for him to return to “my own space as an independent”. His resignation is more about how he now wants to allocate his time, but he told the Alice News that he was “not happy” with the messages on the how-to-vote card, and did not hand it out during the election. He also did not allocate preferences.

Pictured, above right: Mr Lechleitner campaigning at Hermannsburg (Ntaria), supporting the Warren H. Williams standing for the FNPP in Namatjira.

By ERWIN CHLANDA How do you deal with having post-traumatic stress disorder, being retired and bored? Easy. You buy an “absolutely dead stock standard” Holden ute, spend...
Read more
Issue 36

By ERWIN CHLANDA Former mayor Damien Ryan (pictured) has been unsuccessful in his tilt at Territory politics for the CLP, failing to unseat the Territory...
Read more
Issue 36

OpEd by ELI MELKY The public backlash in response to the story in this newspaper on Thursday last week regarding co-opting of councillors was not...
Read more