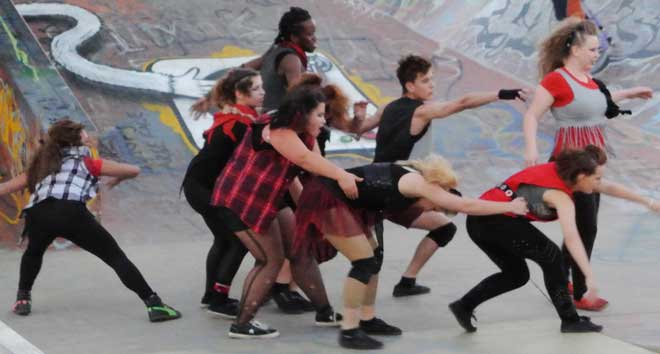 Instead of skating or biking dare-devils on the edge of the half-pipe, it’s a crowd of parents and friends. They’ve come down to the Alice Springs Skate Park to watch Sprung, a new youth dance group. In the lead-up they are kept entertained by a band of skateboarders, and even when the performance starts a few kids on scooters continue to use one end of the park – it’s their space, after all. But it’s great to see it also being used for a different kind of activity, and its dramatic possibilities make it an excellent choice of venue.

As the sun goes down, there’s a familiar rattling sound. The first dancers emerge, shaking out a rhythm: the rattle is from the all but empty spraycans in their  hands. They brandish them almost like a weapon, they inscribe bold flourishes in the air. The image is clear: this is about making your mark, as is spelled out in the overall title for the piece, Graffiti. 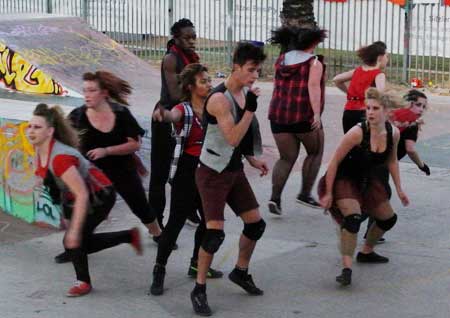 There was a youth dance performance at the recent Wearable Arts Awards by members of the Duprada Dance Company. They had a very different energy: the emphasis was on the collective, the group moving as one, a strong feature of teenage life for many. The Sprung dancers express something more fiercely individual. These young people are bound together sure, but on conditions – they need room to move, to influence, to be acknowledged and desired.

The performance pays strong attention to youth culture: the graffiti sequence is followed by a piece about staying connected via mobile phones. There are gestures and stances associated with mobile use that have become instantly recognisable – the group treats us here to the full repertoire. This piece also has the merit of some spoken word, that adds to its depth.

The same goes for the next sequence where the recorded voice-track has the performers considering how they have made their mark – “by being a male dancer”, “by following my dreams”, “by trying to act older”. The choreography here emphasises  individual difference.

The overall performance used the Skate Park spaces and forms to good dramatic effect. I would have liked the scripting to continue. I think there were three more sequences, including a good one about pairing-off dynamics, but they began to blend a bit for me. Spoken word, even used sparingly, would have the merit of focusing the general viewer’s attention and possibly also help articulate the dancers’ moves more clearly.

Sprung is for dancers who have already had some training at school, giving them an avenue for continuing dance without having to leave town. At the weekend performances credit was particularly given to choreographer and dance teacher , Miriam Nicholls (formerly Bond). The Alice Desert Festival program gives credit also to Jordan VanderSchuit, James Loveday and Hayley Michener, as well as the dancers. They were supported by Incite Youth Arts and the Dusty Feet Dance Collective. 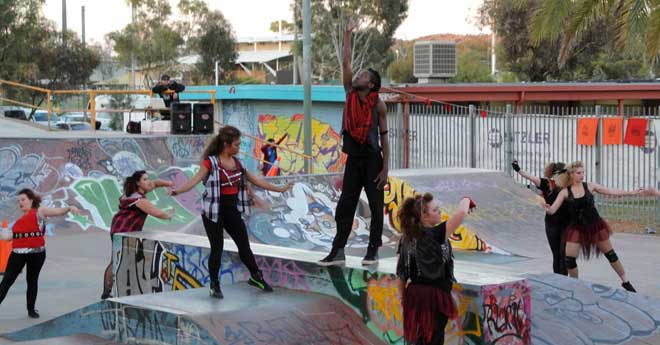