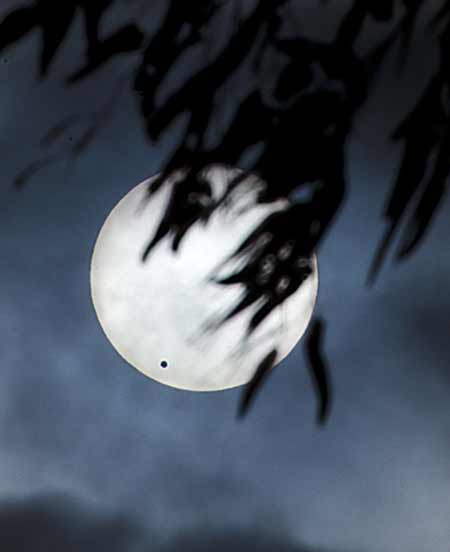 It appears NT tourism promoters have fumbled an opportunity to capitalise on free world-wide publicity for Alice Springs when Venus transited the sun today.
The American space agency NASA picked The Alice as one of two sites around the globe to record a live feed of images on the internet.
Columbus State University scientist Michael Johnson told the ABC that Alice Springs quickly became the main live streaming site worldwide as the other NASA site, in Mongolia, had clouded over and the sun had set in the United States.
An early glitch caused by a road worker near Mataranka inadvertently chopping the fiber optic cable carrying the signal was overcome by routing the images through the internet system of the Alice Springs school where the NASA observation site had been set up.
Alice Springs was set to consolidate, the world over, its reputation as a reliably sunny place.
In fact Mr Johnson told the ABC: “Actually there are two reasons we picked Alice Springs.
“It has great weather during this time of year and it’s also ideal because you can see the entire transit of Venus from Alice Springs.”
Did Tourism NT (TNT) and Tourism Central Australia (TCA) explore opportunities for hammering home, in connection with the transit, the point about The Centre’s great weather?
It doesn’t appear so. A major chance for “leveraging” – that favorite buzzword – has clearly been missed.
Staff for TNT CEO John Fitzgerald and for TCA’s CEO Peter Solly were not aware of any such initiatives.
Neither of them could be contacted: Mr Fitzgerald was on his way to the airport to fly from Darwin to Sydney, and Mr Solly, from Alice Springs to Ayers Rock Resort.
IMAGE: The black dot is Venus. Photo by Alice Springs photographer MIKE GILLAM. See also his comment below.