In The Centre, Newmont Gold Mine is looking to double its intake of Aboriginal workers 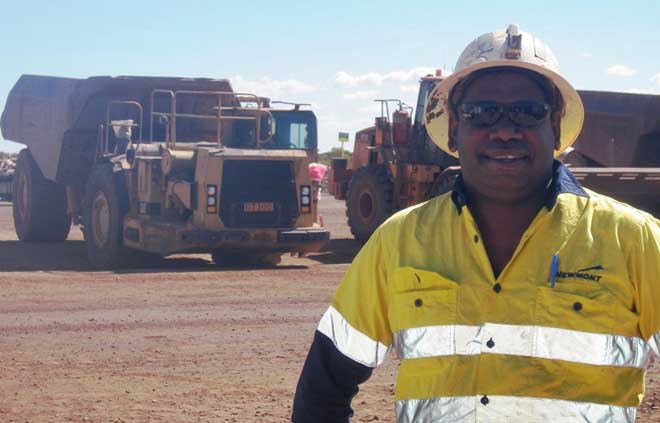 Will locals, like Jeffrey Matthews from Lajamanu (above), respond?  He’s been at Newmont for nearly three years.  He started doing contract work around the mine as part of a program called the YAPA Crew and moved from there into full-time employment with Newmont.

Skills shortages and the resources boom – they’re the mantra when it comes to talking about Australian employment opportunities and all levels of government would like to see Indigenous people responding. In Alice Springs Martin Glass is working on “lining up the ducks”.
He’s a former Commanding Officer of Norforce, northern Australia’s Specialist Reconnaissance and Surveillance Regiment, an Army Reserve unit. That position gave him a lot of experience working with Aboriginal soldiers who are “unbeatable”, he says, “when they’re well trained and operating in their own country”.
The Norforce model is a good one for many Aborigines in remote Australia, says Mr Glass. It’s well paid, attractive work for them and while part-time, they can do up to 150 days a year, which makes a real difference financially for them and their families. It might be something that the mining industry could look at, he says, particularly the new mines coming on stream and the various exploration endeavours.
In the meantime, with the backing of his steering committee, he is looking to double within the next 12 months the number of NT locals working at Newmont Gold Mine in the Tanami Desert.  The committee is made up of representatives of the three tiers of government and industry, formed as a result of an MOU signed between the Australian Government and the Minerals Council of Australia. There are four other regional coordinators around the country, with a fifth to come.
Mr Glass says Newmont currently employs some 60 Indigenous workers, male and female, and almost all of them are from the NT, both the Centre and the Top End. The push is on now to draw more workers from the mine’s surrounding areas and in recent months the company has held a career expo in Alice Springs, conducted a presentation at Centralian Middle School and has presentations coming up at  Lajamanu, Yuendumu and Kalkarindji.  A recruitment officer from Newmont has also been visiting the Central Land Council’s employment unit twice weekly.
Five men from Central Australia are undertaking their pre-vocational training for entry into mining at Batchelor Institute’s northern campus. The intention is to replicate this course in Alice Springs, probably starting February, with another 10 to 15 students. A further 10 to 15 are expected to do the training on site at the mine starting in August. Those numbers, if they all follow through into jobs, will get Mr Glass halfway to his goal.
To do the course candidates need to have literacy and numeracy equal to Year 10 attainment. Mr Glass is a strong advocate of flexibility but there are basic minimum literacy and numeracy requirements to meet safety standards.
Staff at Newmont, as is typical across the industry, work 12 hour shifts for 14 days on, seven off, and are mostly fly-in, fly-out. Mr Glass says the existing Indigenous workforce handles the rigours of this well, and the week off can really suit some workers. With new mines opening up in the Alice region, such as Nolan’s Bore, there may be scope for varying this: “If everything is not already in place, it’s easier to change.”
Exploration activity also offers scope for new arrangements: a labour pool could work extremely well doing this kind of work, he says. The jobs are varied, everything from guides on country to truck driving and sample recording, and they’re well paid. But you do have to put in the hours.
Mr Glass senses a “groundswell of momentum towards more meaningful jobs” amongst the Aboriginal people he’s meeting and hopes that it will be sufficient to counteract the disincentive of passive welfare.

Note: The current figure of 60 Indigenous workers at Newmont is actually lower by eight than the figure reported by ERWIN CHLANDA when he visited the mine in 2004. 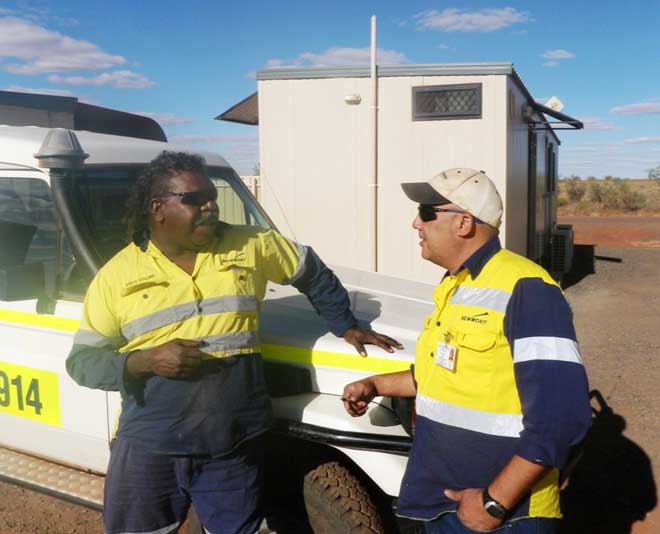 Murray Liddle, a mentor for Newmont, with Steve Jungarrayi Collins from Yuendumu, who has worked at the mine for around six years. Both are machine operators with surface works.