Sweetness and light in council meeting as factions keep truce 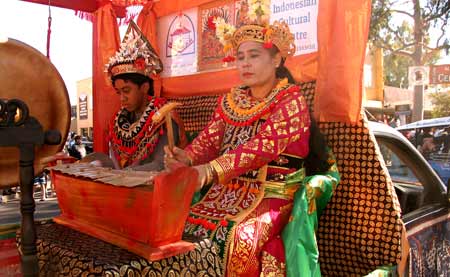 Sweetness and light continued to prevail in Monday’s meeting of the town council committees, with not a hint of belligerent factionalism.
The jolly consensus allowed councillors to breeze through a big agenda probably in record time – at least so far as the meeting open to the public was concerned.
Even wild man Eli Melky didn’t pick a single fight, instead – “wearing his Rotary hat” – effusively thanked the council for supporting the hugely successful Bangtail Muster parade, and the council technical staff for their efforts, well beyond their call of duty, to keep the re-opened pool running.

(Director Technical Services Greg Buxton reported that the Y, outgoing managers of the pool, had reported they are still struggling to get staff.)
Not that there wasn’t fuel for fiery debates, topped by an initiative briskly gaining momentum. It is taking a leaf from Port Augusta’s book whose council, under the resolute leadership of Mayor Joy Baluch, controls a committee to which all agencies active in the town – State and Federal governments included – are brought to account once a month.
Now it’s time “we’re taking charge of what’s going on in this town,” as Cr Liz Martin put it on Monday.
Several councillors were not happy with a report by Director Corporate and Community Services Craig Catchlove, who is on holidays, and who had been asked to put together material for discussion about the Port Augusta strategies.
Cr Martin said she was “disappointed” in the report. The council needs to look at the strategies “more deeply” to see “what we’d like and what we don’t”.
Cr Chansey Paech also said the issues needed to be reported in “more depth” and while Alice Springs had an action plan it may benefit from incorporating elements of the Port Augusta model without re-inventing the wheel.
Cr Steve Brown agreed, saying that the Alice council wasn’t monitoring the entire management of the town.
Deputy Mayor Brendan Heenan said the council should “meet with the agencies concerned” in Alice Springs and they should be given the report.
The meeting agreed that this should be done and it will now go forward to the full council.
Cr Martin said there are parallel issues in the two towns yet there are “major differences in the dynamic”.
Port Augusta has relatively near to it some 20 communities, including Adelaide, with comprehensive services, whereas Alice is seen as “the big smoke” by people in some far-flung 250 communities in The Centre.
She said she will supply to the council a dot-point summary of the issues, as she researched them, including information about grog from Port Augusta going to Alice Springs without being captured in the Territory sales statistics.
Cr Martin described the recent coverage about alcohol being bought from interstate in the Alice Springs News Online as accurate.
Cr Martin also said there is a lot of vacant Crown Land in Alice Springs, as well as the rail corridor, where illegal drinking takes place.
CEO Rex Mooney added that 74% of the Alice Springs municipality is Crown Land.
He said the issue could be handled by a “sunset committee” active until the task is completed, and he would discuss the matter with Mr Catchlove who is due back on Monday.
Cr Martin said the initiative needed to be driven by the elected members, not by the director.
Hal Duell, the only person in the public gallery, expressed his concerns that the debate on the Port Augusta model would now move behind closed doors but Mr Mooney assured him it would re-surface at an open council meeting.

But minutes after, during a discussion about litter dumped in public places, the “c” word came up again, with Cr Martin suggesting that trash found near Ilparpa Road contained letters bearing people’s names and hinting this should be dealt with in confidential.
Mayor Damien Ryan asked for an update about the removal of abandoned vehicles and mentioned the one – trashed and abandoned – outside the Kindergarten L’il Antz, as reported in the Alice Springs News Online.
He said the vehicle, in a lay-by which is part of Sturt Terrace, was becoming a target for vandals and a hazard for parents and children frequenting the area.
CEO Rex Mooney explained that it depends on whether the road is a government road or a council road and if it is a government road “the council is not involved”.
The next question is whether the vehicle has current registration.
He said: “We, as a council, move very promptly. Occasionally we have to give the government office a reminder.”
In fact the vehicle had been removed before the meeting.
Not only were the big issues discussed harmoniously, the little ones were as well.
To the writer some appeared so very little that one wonders why they are being put before all the august councillors assembled: Why are some floor lights outside the civic centre not working? Should vehicles be allowed to drive indiscriminately on Head Street oval? The certifier has advised a handrail with underwater loop is not required for the aquatic centre.
PHOTOS: Top – The town council got a gong for its assistance to the Bangtail Muster parade. Middle – the photo councillors have in their wallets these days: Tough Port Augusta Mayor Joy Baluch. The Alice town council is taking a hard look at her grog and crime control measures. Above – an abandoned and vandalised car was a headache for a while.

Facebook
Twitter
Pinterest
WhatsApp
Previous articleTown council grapples with Falconio poster: Author hits out at Mayor Ryan
Next articleNamatjira: for the man and now the project art was a catalyst for change