Owners of the Alice Plaza would welcome the re-introduction of traffic to the northern end of Todd Mall. Their representative, Tony Bruno, says they have always believed that the mall was too long and that traffic and some convenient, short-term parking would help bring life back to the northern end.
If that were to happen, would the Plaza consider re-orienting its business towards the street?
“Anything’s possible,” says Mr Bruno. “If the landscape changes that could be looked at.”
Would it be possible to re-orient the food court to that side of the Plaza and introduce some outdoor eating options?
“Possibly”,  says Mr Bruno, but due to the high infrastructure costs involved there would have to be “significant demand” for that to occur.
The former newsagency in the Plaza is now vacant. If someone proposed a cafe for that tenancy, could that be approved?
Mr Bruno says owners would consider all proposals but they would prefer something new and different to existing offerings at the Plaza.
Individual tenants could take the decision to open onto the street. Bev Ellis, who owns the Dymocks bookstore in the Plaza, says all the tenancies originally opened onto the mall, as well as internally. When she ran the bookstore in conjunction with the newsagency next door, she blocked off the newsagency’s door onto the mall because of security: more stock was going through that door, unpaid for, than was coming through the front register.
A few years ago she looked at putting in an entrance from the bookshop onto the mall, as the original one is not in a good position. This would have allowed her open when the Plaza was closed. However, the cost, then about $8000, to take out windows, rearrange shelving and so on was exorbitant: “I would have had to sell an awful lot of books to recoup that.”
Ms Ellis disagrees that the northern mall is “dead”, pointing to the “very active little restaurant” across the way, the Mixed Lollies boutique, the Todd Tavern’s al fresco area.  The markets also transform the area and she stays open to trade on market days.
She has “no problem” with the re-introduction of traffic although doesn’t go so far as to welcome it.
Chris Neck, owner of Musicworld, says his business faces inwards because of the “continually unpleasant atmosphere” in the mall. The shop traded through two entrances, one external, one internal, for about seven years, and during that time had a dozen windows and doors broken, costing over $2000 to repair each time. The breakages were accompanied by theft and other damage. Once the windows were painted and covered in advertising, so that passers-by can’t see into the shop from outside, the breakages stopped.
If the area were livelier and safer, would it entice him to consider opening onto the street?
“Possibly,” he says, but “it’s not on the agenda at the present time. Let’s see what improvements are made first.”
His office looks onto the mall: he says it goes through periods, good and bad, although in summer, the problems are “constant”.  He sees very few shoppers walking through the area, “largely because of anti-social behaviour”, and observes that there’s not much retail at that end of the mall. He says traffic activity would be “a big encouragement” for more retail focus. He “emphatically” expressed the need to open the mall to traffic when he was consulted on the issue 12 to 15 months ago.
“Malls were a fad of the early ’80s and most have been returned to full or part vehicular traffic because they simply didn’t work,” says Mr Neck.
UPDATE, posted October 7, 2011, 9.40am: Steve Thorne, of Design Urban Pty Ltd, who headed up the design team behind the proposals for revitalising Todd Mall, is “hugely encouraged” by the responses of Alice Plaza interests. “Unless there is a response from retailers and other businesses adjacent to the mall, it is not worth spending millions on bringing traffic back in.” Revitalisation can’t be done “half-heartedly”, he says. “There’s got to be a dramatic change in the environment. The mall has suffered ‘death by 1000 cuts’, through a  lack of transparency, activity, vibrancy. “Without those things then what you get is the anti-social behaviour that people don’t want.”
While Mr Thorne’s role in the CBD project has finished for the time being, he has been engaged by the NT Government to chair its Urban Design Advisory Panel and will be keeping a watching brief on what happens in Alice.
Pictured: Top – Musicworld with its back turned to Todd Mall. At right – Could this lively frontage, inside the shopping centre, face the Mall? Below – When the Neck family business opened in October 1988 it opened onto the mall. Photo courtesy Chris Neck. 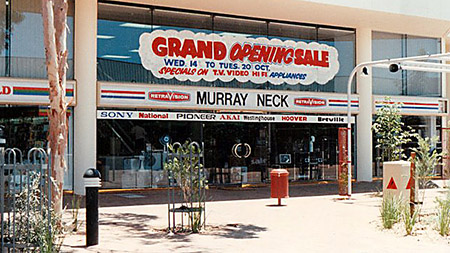