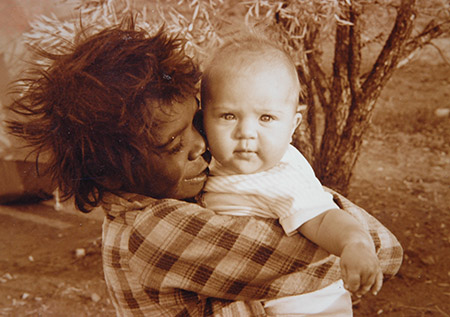 On a crisp and beautifully serene late Febuary morning in 1988 a young couple ventured up a rocky climb on the outskirts of town. While both were fit, healthy and familiar with the land, theirs was a particular challenge, given that one was 36 weeks pregnant.
She was my mother on her way to the very top of the MacDonnell Ranges, on the eastern side of Emily Gap. Knowing that I was not far away, both she and my father wanted to fasten an image to my birth. That they certainly did! Within a few hours of reaching the peak my mother went into labour with your honest author.
Emily Gap for Arrernte people is the caterpillar increase place, and it is said that ayepe-arenye, the caterpillar, as with all Dreaming, “works its power whether you are aware of it or not” (I’m quoting my dad, Rod Moss, 2010). My parents were only told of Emily Gap’s connection to fertility after I was wrapped snugly in their arms, blissfully unaware of their purposeful symbology.
Personally, I like to think that the old caterpillar was calling me to her. Regardless of the larger forces at work, however, I have always felt that my soul is linked to the country around The Alice.
I remember going on beach holidays with my family, where most nights I would dream I was still in the desert.  I would wake up disappointed when I realised I was not.
This is not to say that I didn’t love the ocean and waves.  I frolicked freely in the blue with all the others. Still, when my mind was turned low and allowed to wander, a strong passion for my red home would take over.
Some of my first memories, as for many others who have grown up in this town, I’m sure, include watching the moon soar above the horizon on a full-lit night while sitting on the back of my mum’s bike, riding along the Larapinta Trail to Simpsons Gap. Or making slime and mud cakes at John Hayes Rockhole, shaded from the sun by that big gum that spreads like a bench over the top pool. That branch is perfect for jumping like a frog into the cool depths.
Another milestone, my first favourite café – Bar Doppio for me as a kid was like Mecca. Never had I had such thick chocolate cake, or baby-cinos!
In 2011 there are still so many of the old and now newer quirky places that for an adult provide enriching entertainment. For example, Cam’s Coffee Shop, next to Central Clini – the antics displayed there are always killer funny. From this one example to another on a totally different spectrum – the choir that has been performing out of doors, at Trephina, then Ormiston,  during the annual festival – I feel like only Alice could pull it off.
Many opportunities have sprung from this place for me. Things like working for the ABC at 16, access to substantial grants, support and a mass volume of platforms are what make Alice unique compared to a metropolitan setting.  It seems like most other towns of this size rarely have the chance to realise their potential.
So a few months ago, when I decided to move back to Melbourne, very few people, including myself, saw it coming. Surprisingly though, this was not a hard decision. Part of what has made it as easy as it is was the full realisation that Alice will always be here.
Some things change – Bar Doppio is now a trendy little place called Page 27. However, even with the aging of stones into sand and as the plants will eventually decay, I believe the force behind those significant places is perpetual.
Alice has a lot of heart. It is the centre after all. I’m glad that I’ll always know where it is, that it is safely tucked away far from the rest of Australia. But for now I’m excited to see what the other parts of the body entail.
So this will be my last blog for the Alice Springs News. Thank you to everyone who has followed my pieces and shared the journey with me. I am now sitting in my terrace house next to the train line in North Melbourne, thinking about what I’ll see when I step out onto Spencer Street, or wander to Flagstaff Gardens. It is all so new and enthralling! This city is a fresh canvas just waiting to be painted by my thought. If you would like to keep reading them, I will be writing a blog from next Thursday. Until then, have a wonderful week!
Pictured: That’s me getting a big cuddle from Denis Neil. His family’s friendship with my family is part of what will always keep me connected to Alice.