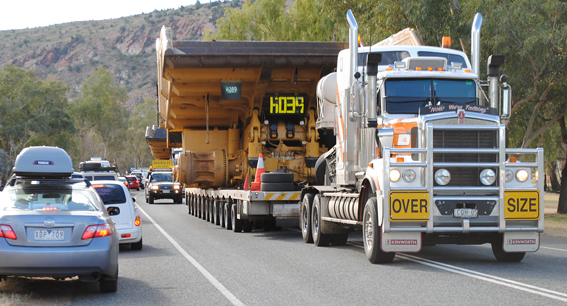 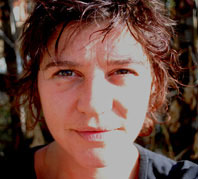 By ESTELLE ROBERTS
(Mozzie Bites is on holidays)

Last year I lost all of my stuff. A fire ripped through my house leaving behind a lot of burnt out carcasses of stuff I had collected over the years. It was amongst other things a cathartic and maybe timely release as it led to my upping out of town in a very hassle-free, liberated fashion.
And now here I am in Alice Springs. Stuff can hold a strange pull on you though. It can pull at you with the nostalgia of the association that it holds. It can catch you with the sweet comfort of its beauty. For me both these things can be found in the strangest of places.
Now when I see a road train I think, “Oh, Gilberts or RTA” and wonder who is behind the wheel and I wonder how the old crew at the truck stop are doing.
Stuff and trucks are really quite friendly allies and on my way home from work I pulled onto the Stuart Highway – in front of me oddly empty but behind me a police escorted motorcade for a road train hauling a huge bright yellow Tonka truck-looking thing. I pulled down a side street and stared as they went past, blocking out the sun. It was colossal. The thing took up both lanes and on the other side motorists had also pulled over to gawk.
A bloke came out into his front yard and asked me what it was. I had no idea! He wondered if it would fit through the Gap. Instead of heading home I wondered too, would it actually fit through the Gap?
Well yes, it did with plenty of room, but oncoming traffic had to pull off the road and now I was one of the many banked up cars behind the thing. I pulled off onto Palm Circuit and raced round to get back onto the highway for another look. The on-coming cop said as he went past that I must really like trucks.  “What is it?” I asked him. “Aw, big dump truck for out in the mine.” I wanted to know how many kms of traffic was banked up behind it. But he was gone.
And mining for what?  Coal, gold, resources, money to make stuff with.
I’ve had an amazing run with stuff lately; my friends that left town left me a whole load of stuff. A microwave, a couch, chairs, stools, stuff stuff stuff. Getting stuff in Alice Springs is a pastime, a hobby, even a blood sport! On Saturday morning I was among the keen hordes up at the crack of dawn lawn sailing, making brief berths at stuff-laden ports of call. A restaurant closing down presented itself with all manner of stuff, wrought iron screens, cast iron fry pan and wine glasses. Ahoy, me hearties, to the land of stuff found on the rolling high lawns.
The last thing on my weekend ‘to do’ list was take the mouldy redback-infested couch to the tip. I was reminded of going with my dad when I was little – I’d find some amazing treasure which he would promptly tell me to throw back in the rubbish. This time though I had had an overload of stuff and the treasures beckoning were all too many and too much. I was happy to leave with an empty van.
Stuff holds energy. Stuff is beautiful and wonderful by virtue of the energy that its previous owners have invested. But now that I have all this stuff, do I have the energy it requires? Stuff can bind you to a place that you may call home. Stuff requires washing, folding and care and some stuff requests portions of your time and energy. I planted strawberries in an old sink. They need me to water them now. But I guess that’s OK, ’cause they are flowering and their fruits I will eventually find delicious.