Breathing new life into the CBD 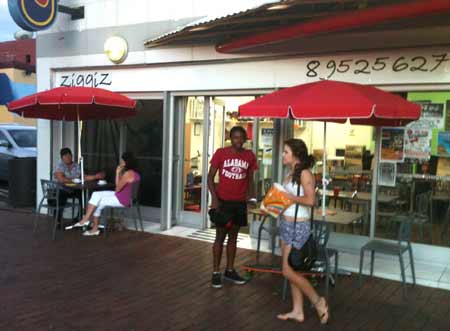 There are ripples of activity at either end of Todd Mall. At the southern end, a new travel shop is shouting out from the corner of Gregory Terrace and Todd Street, the first business to open there after a string of closures and relocations. And at the northern end, there's a new cafe, Ziggiz, and this week Piccolo's restaurant relocated to where Oscar's used to be.

No-one can have missed the artwork on the travel shop, but inside there's more to it than its new look and the usual booking service. The core attraction is access to Wicked Campers. The shop's been open about two weeks. Customers are coming in off the street and online. There's a good mix, says Manager Sara Bangs: "We've had a  couple in their sixties taking a car, it's not just for backpackers."

Asher Tuzewski is the man behind Ziggiz cafe, tucked into a little shopfront of the cinema complex. It opened about three weeks ago.

They start early, by 7.30am, and go till late, the exact time depending on what's happening at the cinema.

"In the cities you can go to a cafe day or night but in Alice Springs there was nowhere like that. We're the only non-alcoholic venue open late. It's a cultural readjustment."

The cafe's presence makes a contribution to improved security in the north end of the mall: "We're an extra pair of eyes in the area and we've been able to help clamp down on some issues."

Asher, who grew up in Alice, sees the cafe as part of a big picture: "I want people to believe in this town." KIERAN FINNANE reports.

Pictured, top: Signage you can't miss, the new travel shop on the corner of Gregory Terrace and Todd Street. • Above: Ziggis cafe, a welcome new presence at the northern end of the mall, often a hot spot for anti-social behaviour.