'Looking after children was her life's chosen job' 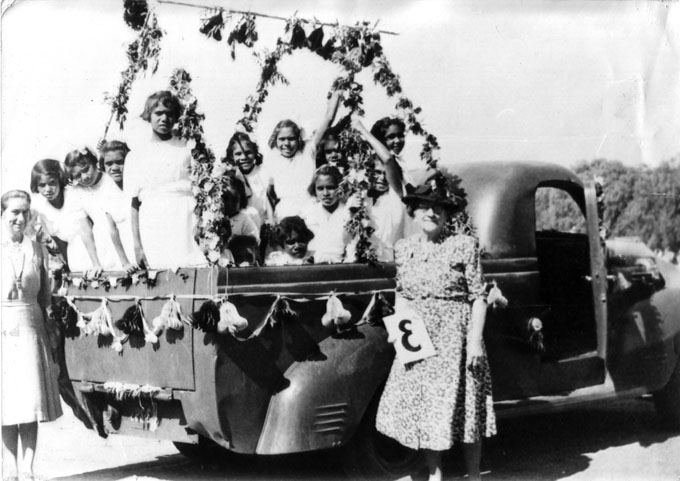 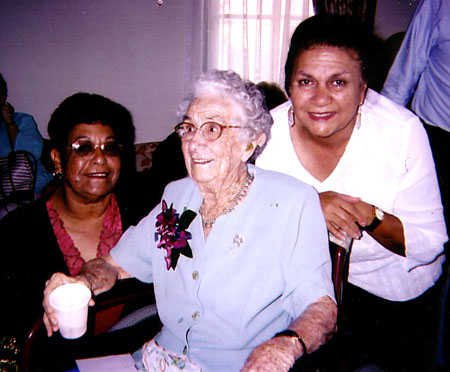 Ronda Ross was a little girl of about six when she arrived at St Mary's
Children's Home in Alice Springs. She remembers getting out of a taxi
with her older brother and sister, Clive and Fay, and being immediately
surrounded by a swarm of other children. Then she heard a voice saying,
"Stand back, children, let her breathe!"
It was a "beautiful, gentle voice – always". It belonged to Sister Eileen Heath, who has passed away just short of her 106th birthday at the end of November. Ronda last saw her in Perth when she was celebrating her 104th. Mrs Ross tells KIERAN FINNANE how she remembers a great Central Australian.

Pictured: 'Belles' of St Mary's (married names in brackets, if known) from left, Sister Eileen Heath, Ronda's sister Fay Andrew (Hampton), Shirley Dixon (Stuart), Ruth Forrester (Swan), Rosalie Kunoth (Kunoth-Monks). Next to Rosalie in the back row are Wendy Bourke (Espie), Doris Branson (Campbell), Eileen, or possibly Ivy Foster peeping from behind the garland, and Mona Bathern.  There are three little girls in shadow next to Rosalie and then in front, Marie Liddle (Palmer), Peggy Foster and Patsy Clements (McDonald). Standing in Front of the Dodge is Mrs Lillian Schroder, who travelled with Sister Eileen and helped her in her work. Photograph courtesy St Mary's Children Home.

Above right: Peggy Jones and Ronda Ross (right) with Sister Eileen at her 100th birthday celebration.