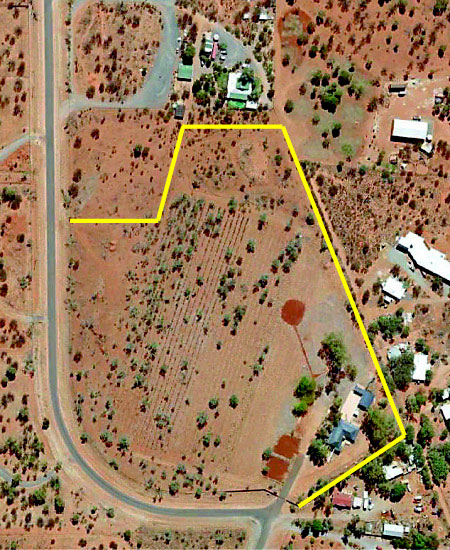 Planning Minister Gerry McCarthy has rejected the submissions from the Alice Springs Rural Area Association (ASRAA), which represents about 70 members, and from an undisclosed number of individual objectors, by giving permission to a land owner in Petrick Road to develop blocks substantially smaller than is permitted in the town plan.
ASRAA chair Rod Cramer says he had not been contacted by Mr McCarthy, nor by Karl Hampton, the Minister for Central Australia over the issue.
The minimum block size in the area is two hectares but Mr McCarthy gave permission for three lots of 1.79 ha, 1.8 ha and 1.56 ha, respectively.
The town council commented only on the application's technical aspects of roads, stormwater and other services, says Greg Buxton, Director Technical Services.
He says while the council was at liberty to comment on other issues it did not, because the NT Government authorities were unlikely to "pay attention" as the council has no role in questions of zoning.
This is a long shot from what the new Labor Government, through its Minister Peter Toyne, proclaimed in August 2001: “Labor [will] open up the town planning process, shrink the powers of the Minister to override the Development Authority, make it fully representative, give it a much greater autonomy from the Minister, and link it much more closely to local government."

NOTE: There are 1512 lots in Alice Springs in zone SD (single dwelling) over 1,000sqm. These are proposed to qualify for a second dwelling.

[Declaration of interest: The author of this report is a rural resident, a long time member of the ASRAA and an objector to the application.]

PHOTO: Approximate outline of the block to be subdivided. Google Earth.